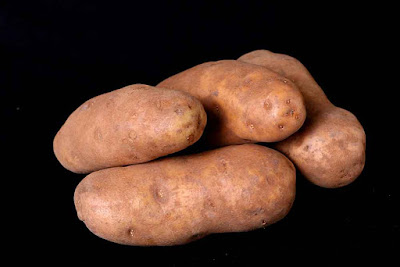 Usually I’m a bit more modest than this, but I do believe that this recipe produces the best mashed potatoes I’ve ever tasted, and usually get comments to the same by everyone who tries them. Here’s how it all came about.


Long about fifteen years ago, I ate dinner at a little place in Roanoke called “Babe’s Chicken Dinner House.”

They’re still around—give ‘em a try some time. Best Fried Chicken ever! They also had what were the best mashed potatoes that I had ever tasted at the time. They were creamy, tangy, savory, buttery and succulent, and probably a few more adjectives as well. Now I loved mashed potatoes, but I knew I couldn’t keep making the drive to Roanoke every few days, so I had to figure out how to make these spuds.

No good asking the restaurant. They weren’t budging on their secret recipe. So I went home and started peeling potaters, and I made about ten batches in my attempt to reverse engineer the spuds. I tried all sorts of things that I thought Babe’s might be using: I tried sour cream. chicken broth. ranch dressing. A few other things I don’t remember. These made for some interesting spuds, but they weren’t “The Best Mashed Potatoes I’d Ever Tasted.”

So I kept at it. I read various cookbooks and tried various recipes and devices to improve my potatoes. I tried all different types of potatoes, from Russet to Yukon Gold to Red to White to Wax to several more. I learned a lot about potatoes, and made some good spuds, but still no “Best Ever.”

The key secret ingredient that had been eluding me was yet to be found, but it was eventually discovered, although not by me. That honor goes to my girlfriend at the time (and now my wife). I had taken her to Babes on a date, and I mentioned my quest to match their potatoes in greatness. She suggested what I might try, and oh my friends, let me tell you I was taken aback. Yes, it was a condiment, certainly--one intended for sandwiches and salads, but it seemed a weird thing to add to mashed potatoes.  Yes, I'm talking about Mayonnaise.  But, I decided, anything for science.  I tried it, and low and behold, this was it. The flavor of the potatoes was incredible, delicious, and perfect. I’d finally matched, or more likely beaten, Babes at their own game.

So, that's how this recipe came about.  I've been making it for over ten years now for my family and friends, and it's always a hit.  Speaking of hits, when I posted this recipe, and mentioned Babe's in the text, the recipe itself started getting a lot of hits--thousands in fact.  Apparently a lot of people are looking for Babe's Mashed Potatoes Recipe.  Well, a couple things have happened over the years.  From readers here on the blog and other sources, I've learned with all likelihood what Babe's is in fact using, and it's different from what I do.  I also have decided that I like my recipe better than babes.  So, if you're trying to match Babe's exactly, I'll go over what I infer they are doing, but I urge you to try the recipe I devised, mayo and all, and see if you don't like it better. 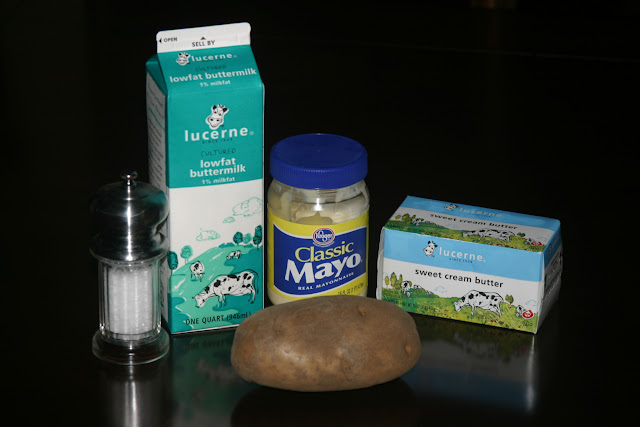 
Wash then peel your potatoes. 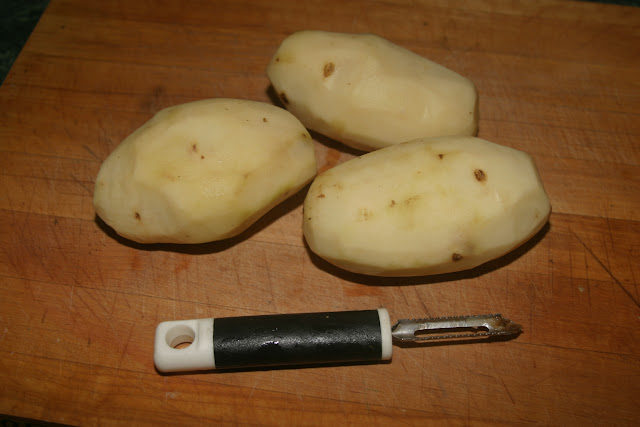 Cut off any dark spots. Cut potatoes in half.  Fill a large pot with water, salt it slightly, then heat. When the water is boiling, add the potatoes.

Meanwhile, melt the stick of butter in a small saucepan and then add the buttermilk to it. Keep this mixture warm, but not boiling. 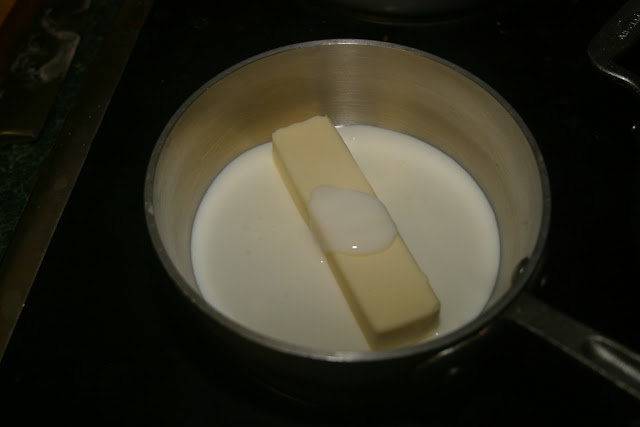 Cook the potatoes until they are soft, but not falling apart—Probably about 30-35 minutes. Now it’s time to use a little device known as the potato ricer. 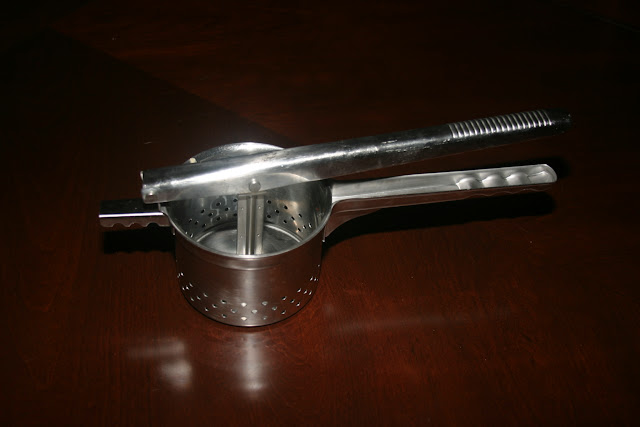 I discovered this little device while researching mashed potatoes in one of my cookbooks (The Dean and Deluca Cookbook, in case you’re wondering). I’ve now decided it is absolutely essential for making perfect mashed potatoes every time. It worked sort of like a big garlic press. You put a potato half into it, squeeze, and perfect little flaky potatoes come out. There’s no lumps like you get with a potato masher, but also your potatoes don’t turn into a sticky, “book paste” like mess either, which can happen with both the masher, or if you use an electric mixer. No, the ricer produces little flakes that are the perfect texture. You can pick one up for about $20 bucks at a gourmet store. It’s well worth the expense.

So, rice the potatoes into a bowl (or mash them with something else if you don’t have a ricer, but don’t blame me if they are lumpy and/or sticky). Then grab a whisk and stir in your butter/buttermilk mixture.

Edit--Instead of pouring the butter mixture in like I'm doing here, ladle it in a bit at a time while stirring the potatoes, until they are the proper consistency.  Point being that you might not use all of the butter/milk mixture.  I've had some people tell me that they tried this recipe and the potatoes came out thin and runny, so I have added this technique, as such can happen if you've used smaller potatoes or lost some of the potato mass during the boil. 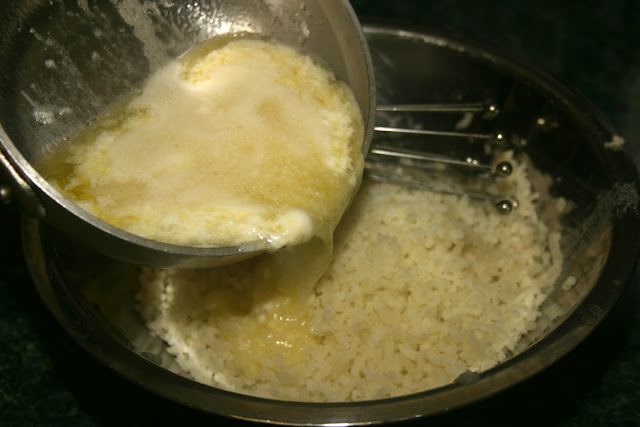 Don’t stir too aggressively; you want to keep the potatoes light and fluffy. Next, stir in your salt and white pepper.

Edit -- I used to call for two tablespoons of salt in this recipe, but over time I've just decided this is too salty.  I've backed it off to 1-2 teaspoons, and then I urge you to taste and adjust to your liking.  Babes potatoes are quite salty, but I find I like mine a bit less these days.

And finally, we come to the secret ingredient—Mayonnaise. Yes, it sounds weird, but this is definitely what will make your potatoes sing. I can’t say for certain if this is what Babe’s uses (Edit--it's likely not what they are using), but the taste of the potatoes comes out actually better. 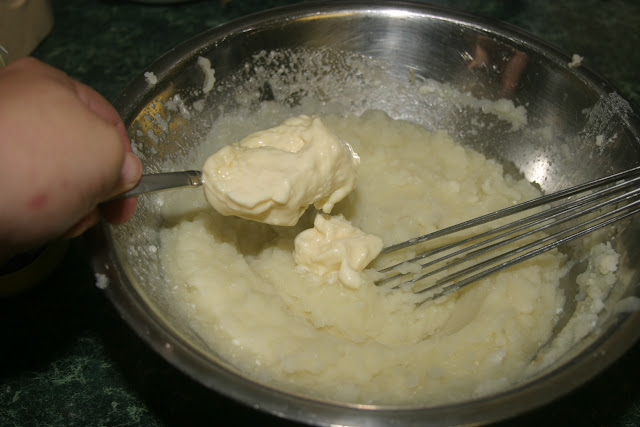 Anyway, whisk in the mayonnaise, and your potatoes are done. Make sure you use real mayo here, and not Miracle Whip, as they are not the same thing. The mayo will actually react with the potatoes and turn them from a dull yellow color to a beautiful, bright white. 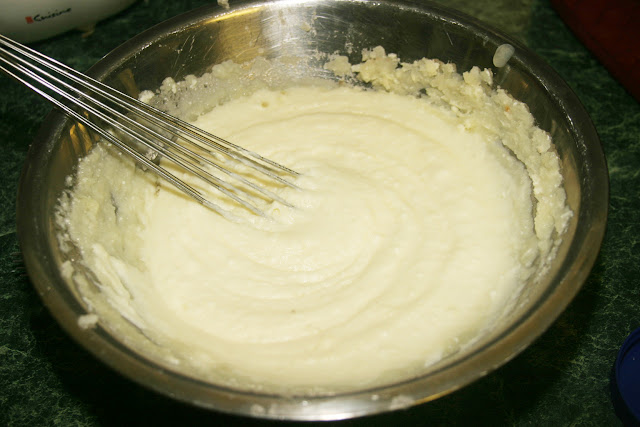 At this point, taste the potatoes. Adjust salt and white pepper as necessary.


So, there you have it, hopefully the best potatoes you’ve ever tasted, revealed right before your eyes. 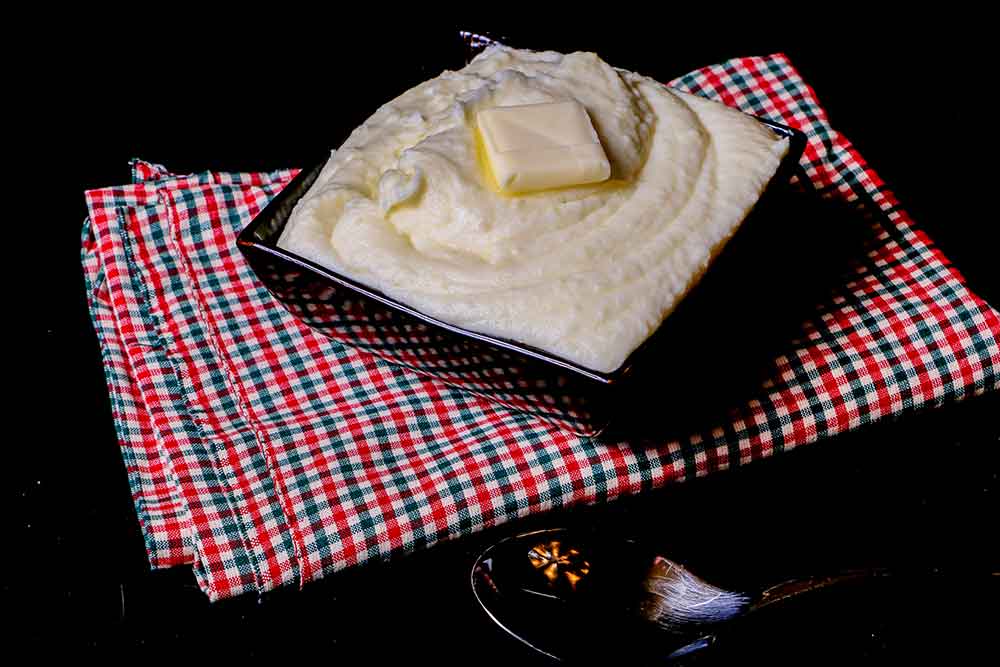 
Edit:  So, the recipe above is what I consider the best Mashed Potatoes I've tasted, and I think they are better than what I get at Babes.  But in posting this recipe, I've had several readers tell me what they discovered Babe's is using.   I can't confirm this for myself, but it seems likely.

One of the biggest differences is they are supposedly using potato flakes instead of whole potatoes.  This makes sense, as it would be a nightmare for a restaurant to have to peel and cook enough whole potatoes for the volume of mashed potatoes a place like Babe's serves.  But if you're thinking of using potato flakes, I would urge against it.  They are notorious for producing some rather sticky, pasty potatoes.  Yes, Babes seems to be pulling off some good potatoes using them, so it can be done, but I still think whole potatoes, boiled and riced with a potato ricer, are superior.  In the near future I will endeavor to make several batches of taters with flakes and see if I can figure out a technique to make these work well enough.

The other difference is they are using sour cream instead of Mayo, as evidenced by the large Daisy Sour Cream containers that have shown up at Babe's catered events.  I have made this recipe using Sour Cream, and it is quite good, but I still find I like the mayo version better.  Both add a tangy quality to the potatoes, which is what sets both this recipe and Babe's apart, but the mayo seems to just do something else that adds to the flavor.  If you want, try it both ways, using sour cream once, then mayo another time, and see which you like better.
Posted by Chris at 10:46 AM 19 comments: