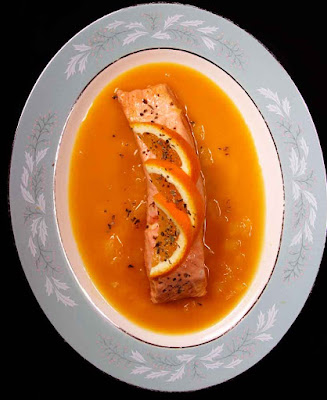 This dish comes from The Netherlands, which is not surprising.  Orange is their national color, after all.  We got it from the lovely Dutch Cooking cookbook that my wife bought me when we were touring Holland a few years back.  We've made several dishes from the book, at least one of which has made it previously onto the blog.  There will no doubt be more.

We liked this one because it was simple yet tasty, features one of our favorite fish, and its a bit different.  Give it a try for a change of pace. 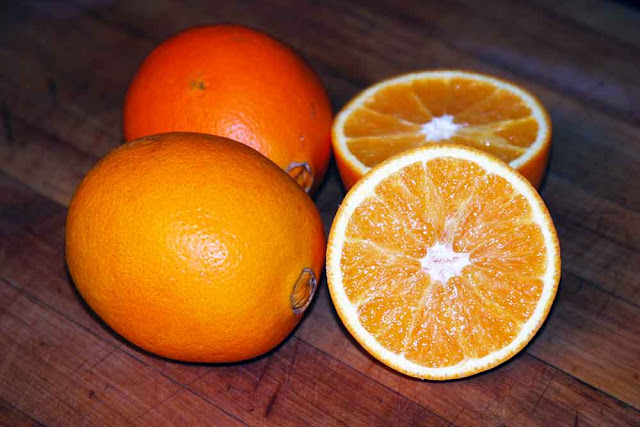 
You don't need a fancy wine for this, but the recipe calls for a German Rhine wine, so why not go with a nice Riesling or Gewurztraminer. 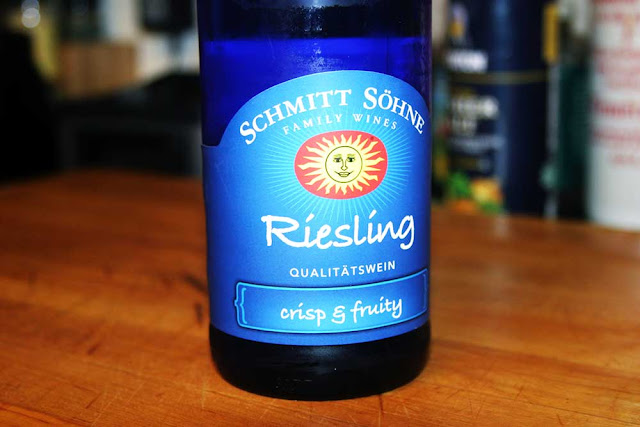 You could probably get away with just about any white wine in a pinch.

As to the orange juice, make sure you make some fresh-squeezed.  This little guy--A citrus reamer, comes in handy: 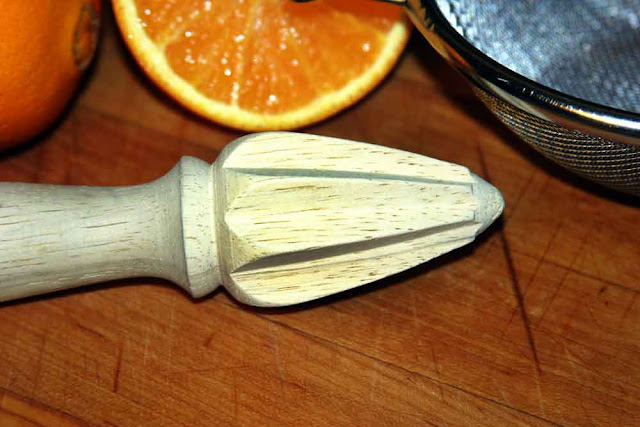 You can really juice out the liquid with one of these babies. 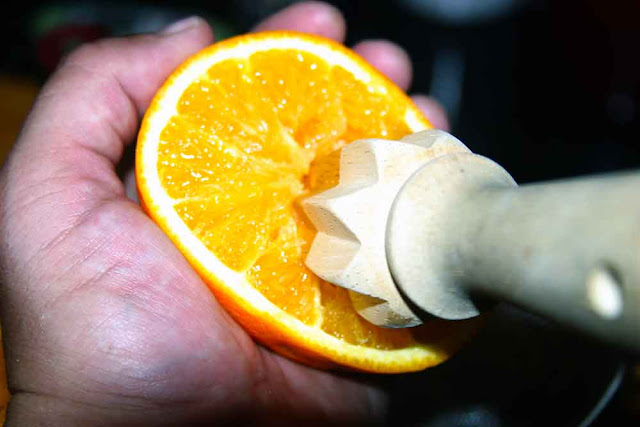 Juice enough oranges to get a full cup of juice. 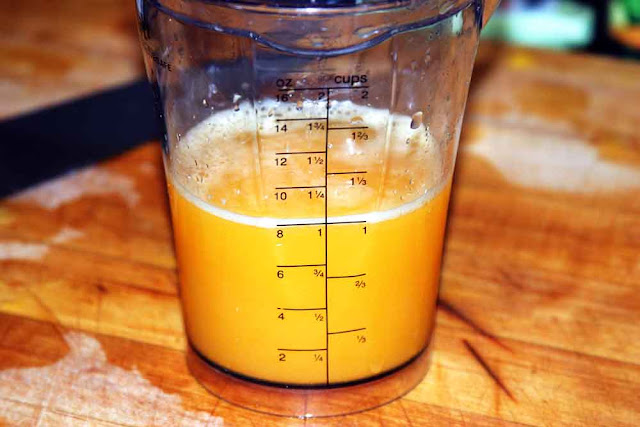 Then measure out a cup of the wine.  Since there is plenty left in the bottle--don't waste it.  Pour yourself a glass. 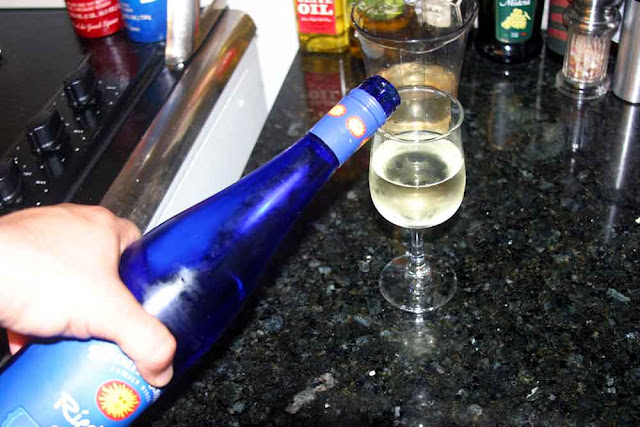 Add the juice and the wine to a skillet. 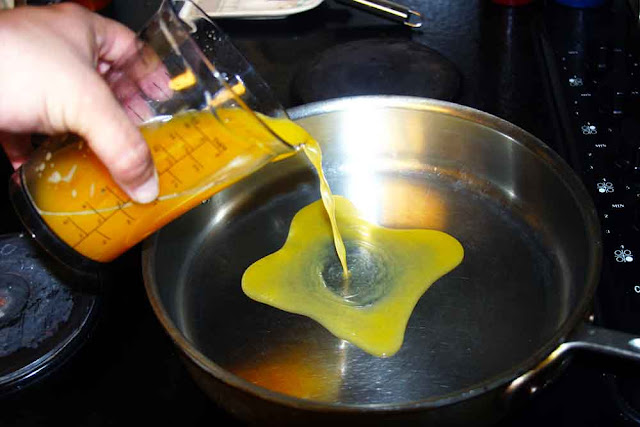 Heat through to a gentle simmer.  Dice your onion: 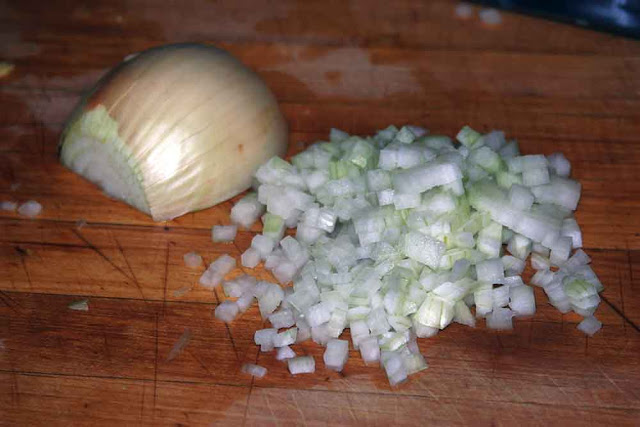 And add it to the juice. 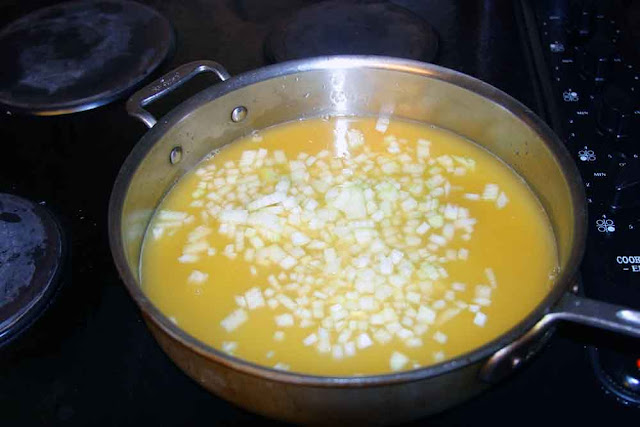 Add the cinnamon and ginger. 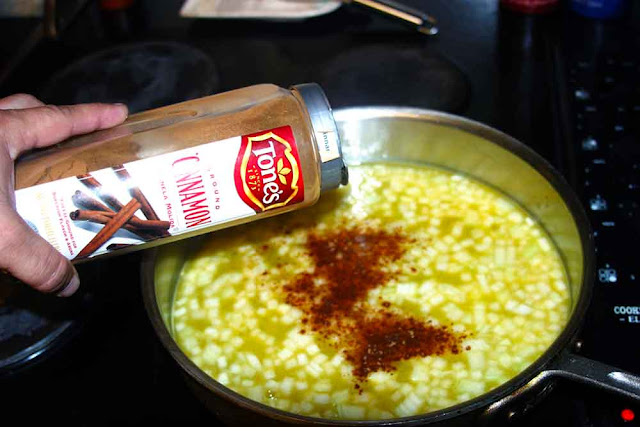 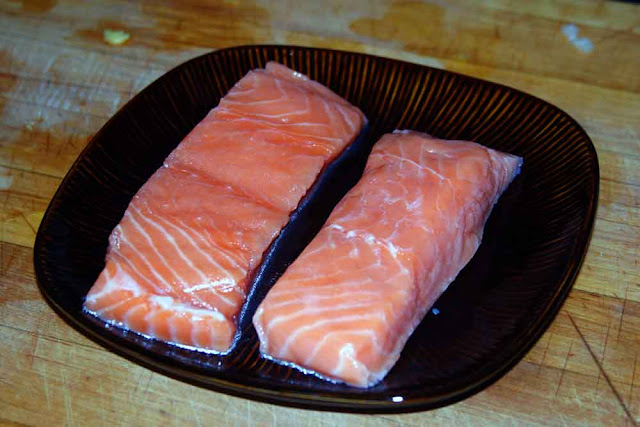 Next, you are ready for the salmon fillets. 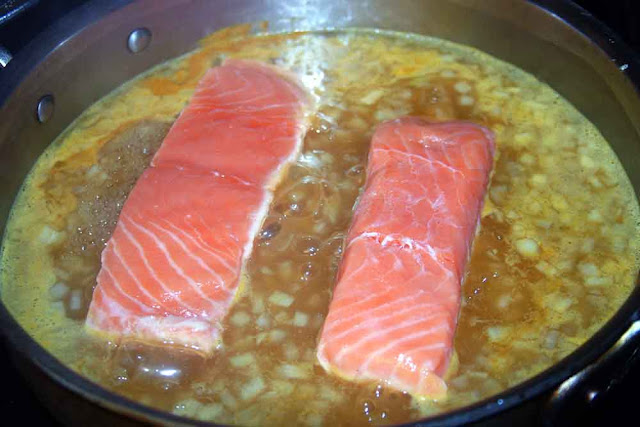 Place them in the skillet and cover. 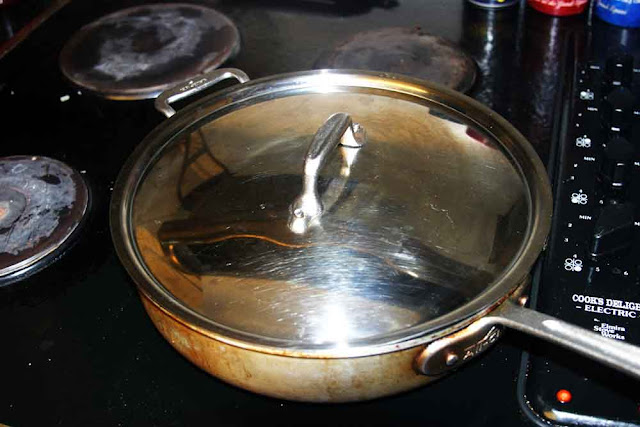 Gently poach them for ten minutes.  At this point, remove them and keep warm.

Bring the liquid to a boil and reduce until a thick sauce is formed.  Season with salt and add the butter and let melt.  Stir and then serve over the salmon.  Garnish the fish with some of the thin orange slices and serve immediately. 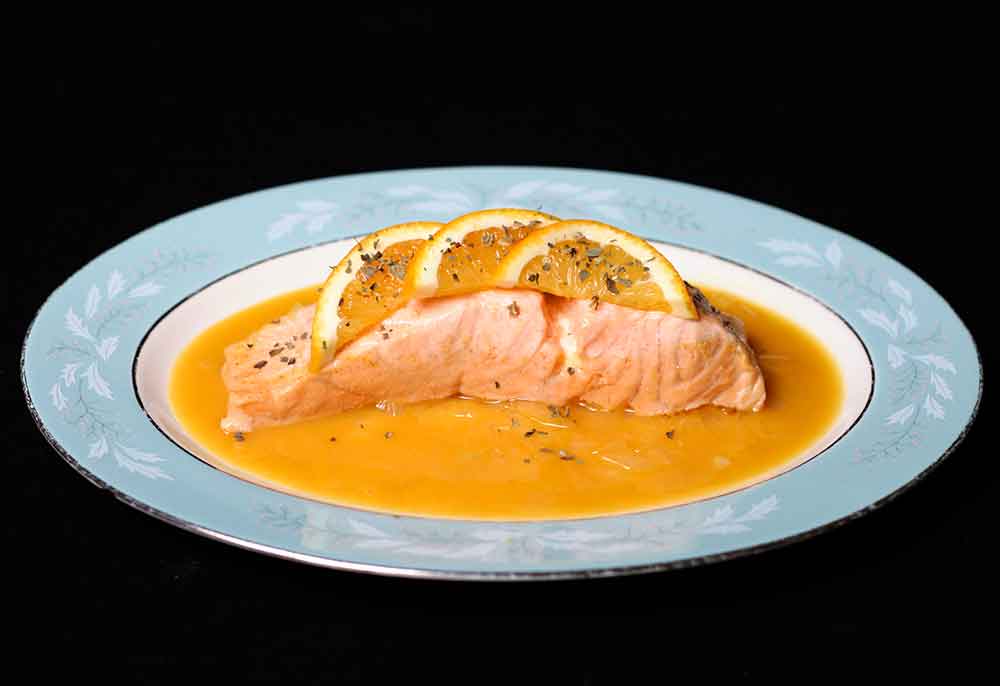 
Nothing wrong with going Dutch now and then. 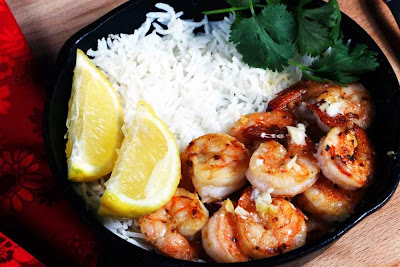 For several years some friends of mine lived on the Island of Oahu, and I was fortunate to get to visit them several times.  They introduced me to some great beaches, great hikes, great bars, but perhaps the most wonderful thing they introduced me to were the North Shore Shrimp Trucks. 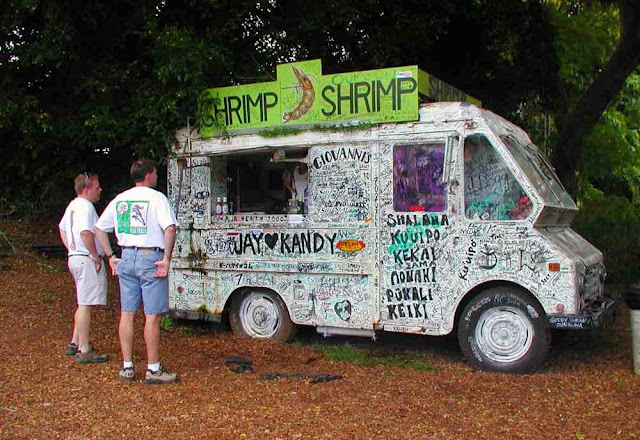 These little rickety trucks are all over the Oahu North Shore, and there seem to be more and more every time I go back.  But the original truck was Giovanni's White Truck, which first went to shrimping in 1993, predating the recent food truck phenomenon by a decade or two.

Giovanni's serves their shrimp three ways--an original Scampi style, a Hot and Spicy, and a lemon-butter, which is basically the scampi minus garlic.  My fav has always been the hot and spicy, which is so hot and so spicy that they practically make you sign a waiver before they'll let you purchase them.  But their original scampi style is pretty darned awesome as well, so that's the one we'll feature today.


This one starts with garlic.  Lots of it. 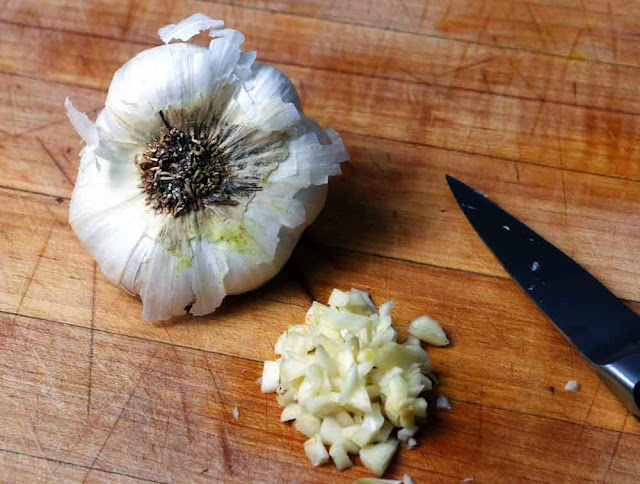 Dice the 15-20 cloves coarsely and place in a large Ziplock bag with a couple tablespoons of olive oil.  Add the red pepper flakes.  De-vein the shrimp and, if you want to be authentic, leave the shell on.  That's how they do in on the North Shore.  Here, I've gone ahead and shelled them as well.  Either way, take the shrimp and add them to the Ziplock.  Toss to coat the shrimp well.  Let sit a few minutes. 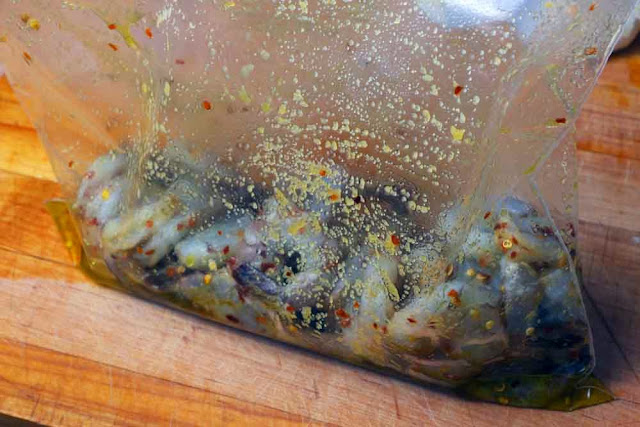 Meanwhile, melt half the butter in a small saucepan. 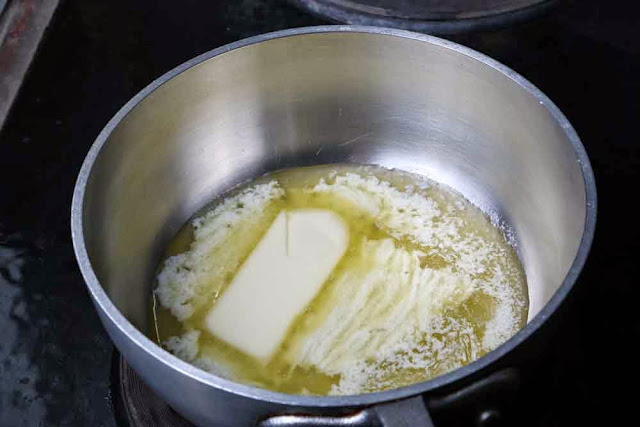 Melt the other half in a large skillet.

When the skillet butter starts to foam, toss in as many shrimp as will fit without crowding.  Cook about 2 minutes and then flip the shrimp. 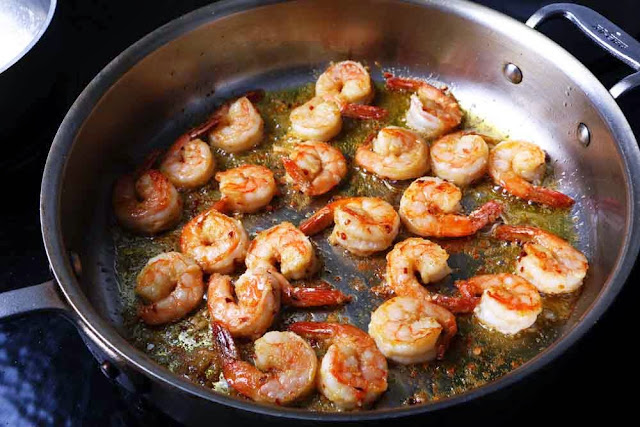 Maybe a little longer if you went with shell on, but just let them start to get pink.  Nothing worse than overcooked shrimp.

Once the butter in the saucepan his melted, add the rest of the garlic to it, 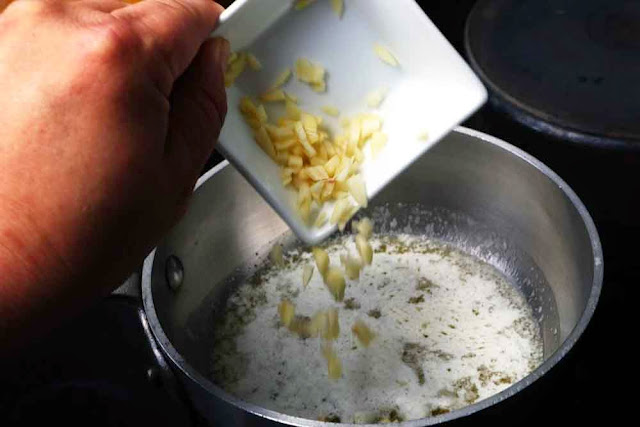 as well as the lemon juice. 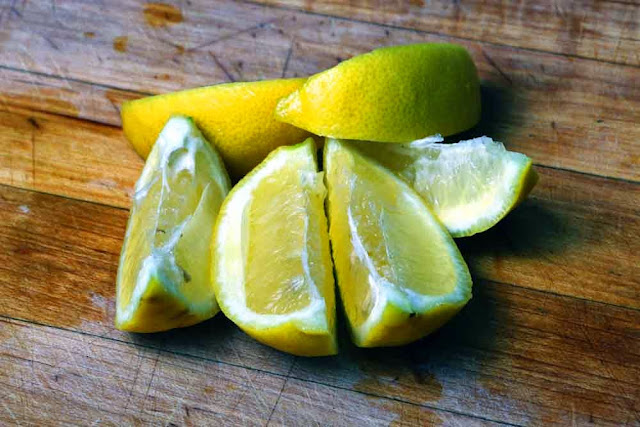 Cook your shrimp in batches until finished. 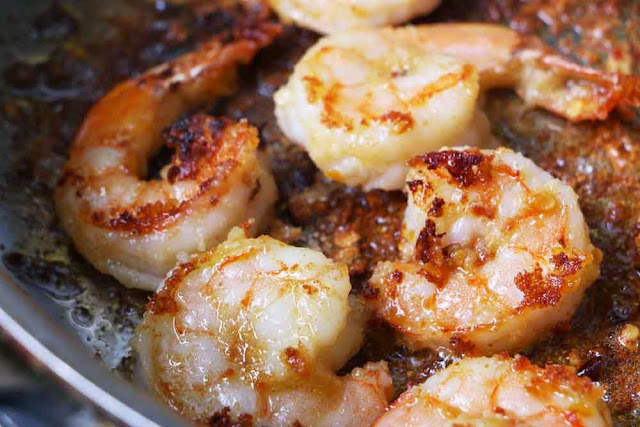 Drizzle shrimp with the garlic/butter/lemon sauce and serve immediately, preferably with some steamed rice and a bit of extra lemon for garnish. 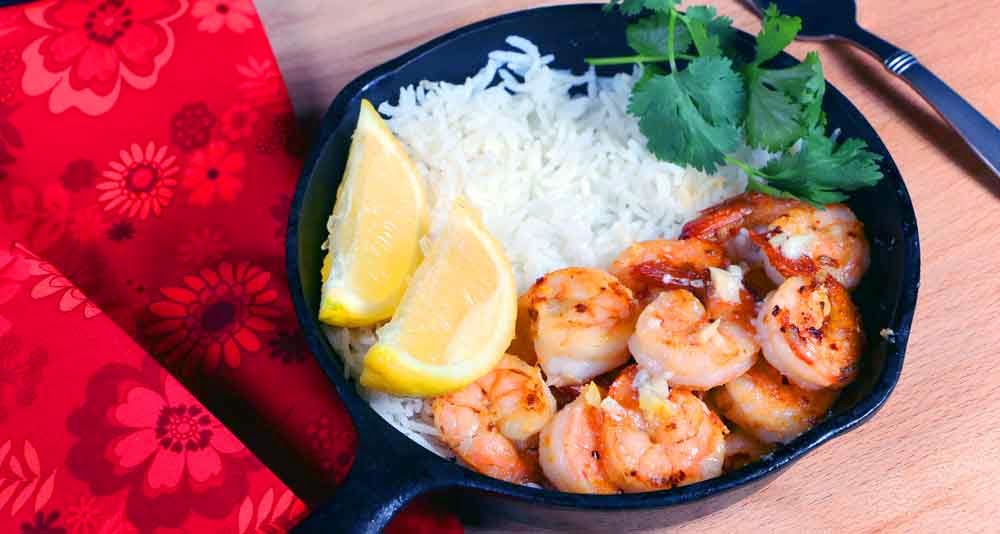 A simple dish, yes, but sometimes it's good to keep things simple.  Particularly if you're running on island time. 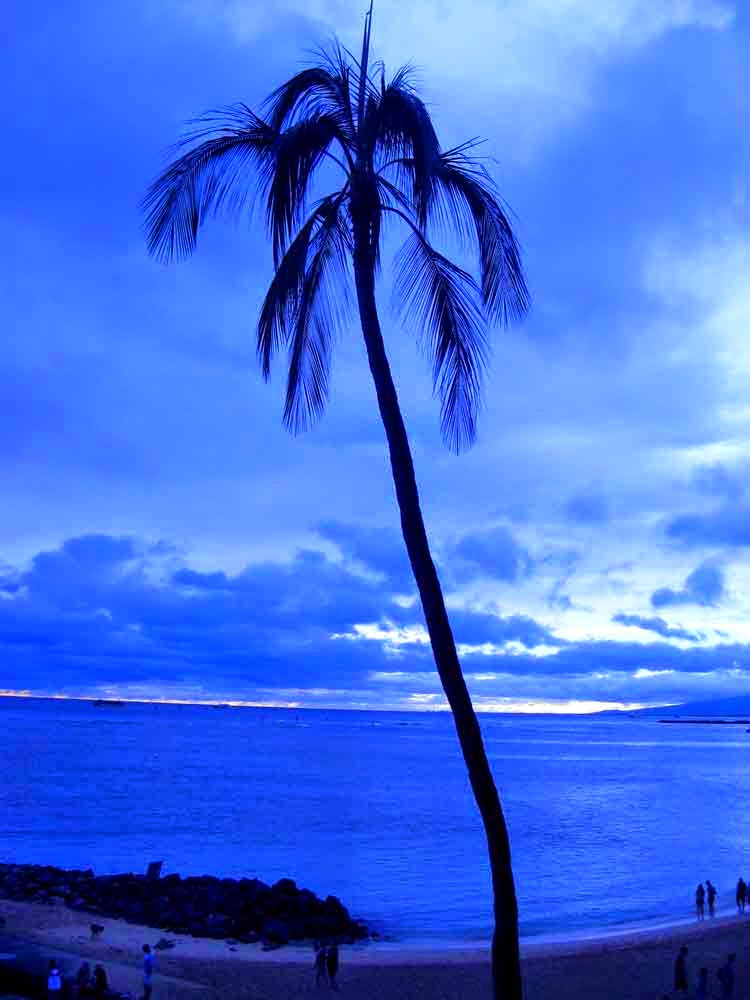