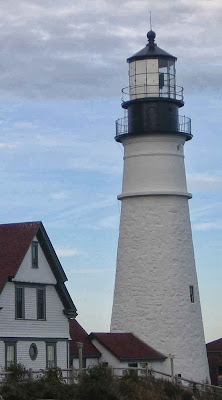 I’m a little sad this month, even though October is my favorite month of the year.  Yes, I love the fall, and there’s no better place to embrace all that is autumn than that Foliage Fantasy Land: New England.  For years me and the wife made a point of pilgrimaging to that region--Maine, in particular, during the height of fall foliage colors in October.  But it wasn’t just the pretty colors that compelled us, fall is New England is just magical all around.  But, for various reasons, we’ve missed making that trip the last few Octobers, including this one.  Thus I am sad.  Fall in Texas is little more than a browning of the leaves, and it lacks that quaint, travel-back-in-time New England charm. 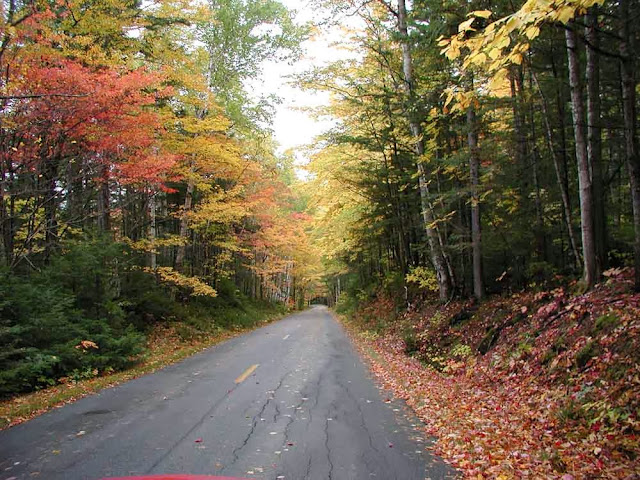 So, what to do?  Well, if I can’t be in New England, perhaps I can bring a bit of it to me, in the form of some delicious New England Style Clam Chowder.

This is a thick, creamy, delicious dish that I always make a point to get a few bowls of when we visit Maine.   I first had this wonderful chowder (or chowdah, as they call it in Maine) at the Jameson Tavern in Freeport, Maine, and that’s the version I’ve tried to emulate in the recipe below.

They wouldn’t budge on their recipe, but I gained a bit of inspiration from one of my old Culinary Arts Institute cookbooks from the 1950s. 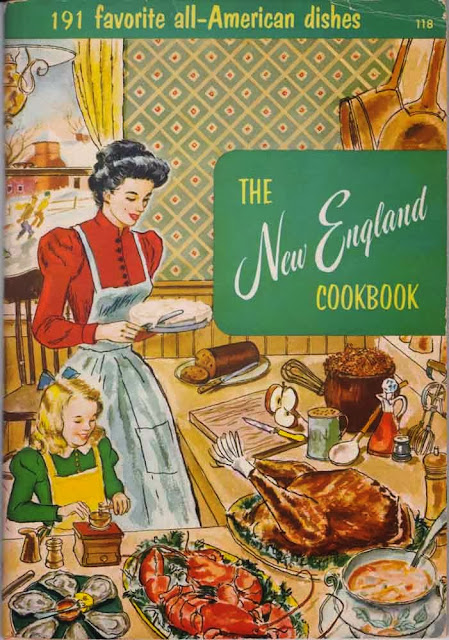 I tweaked the recipe just a bit and came up with the one below.  It was pretty close.  Give it a try, it just might make your autumn a little more bright and cheery. 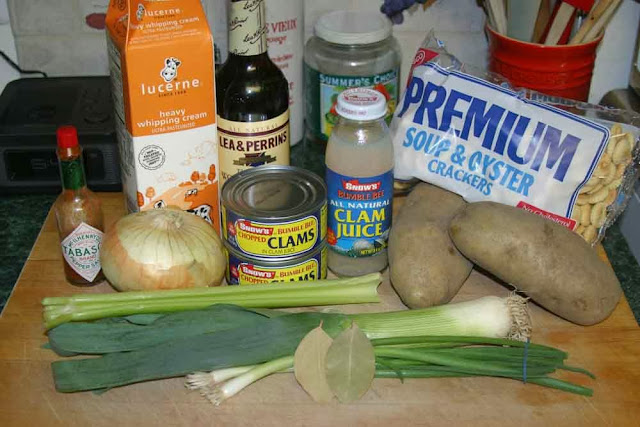 Cut the bacon into matchsticks and fry until crispy. 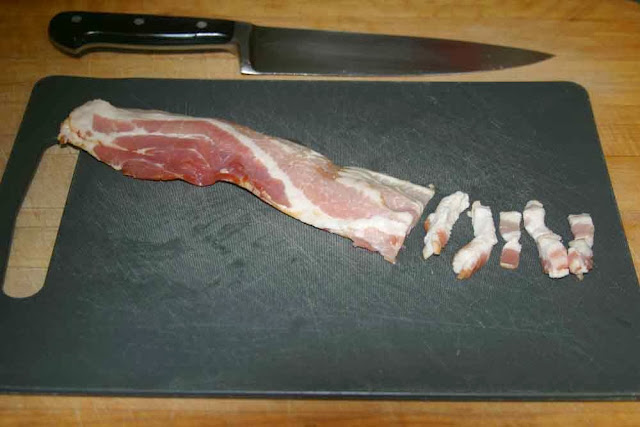 While bacon is cooking, mince your onion, celery, leeks and green onions. 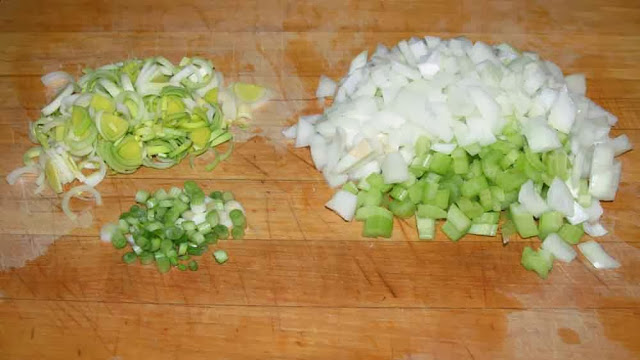 When bacon is crispy, remove bacon and reserve. 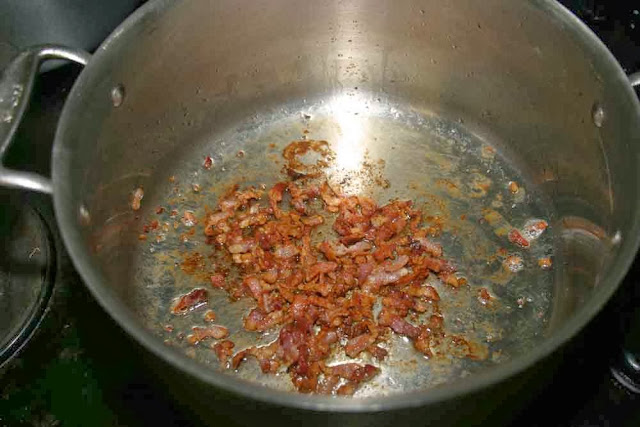 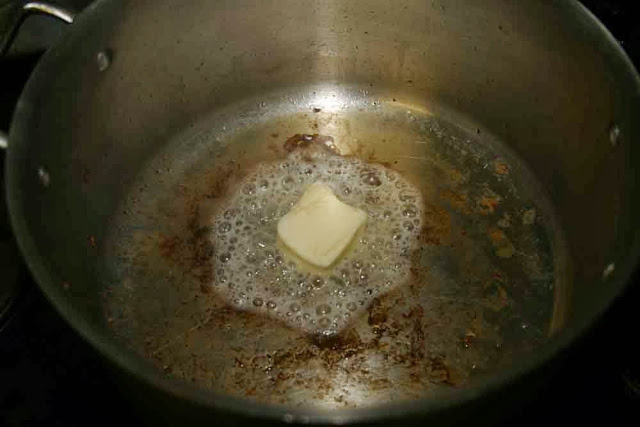 Once melted, sauté onion and celery until soft and translucent. 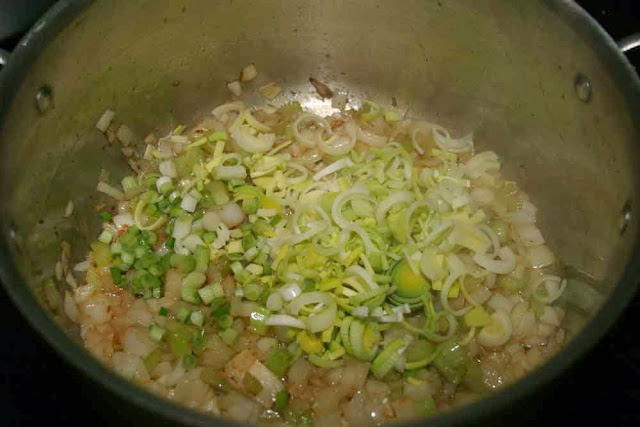 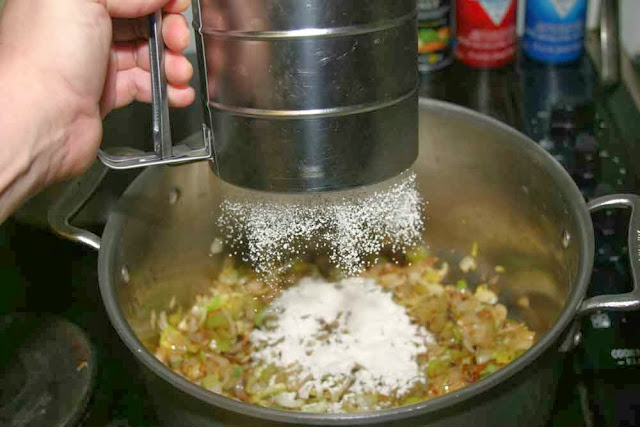 ...and cook over low heat, stirring, for two to three minutes.  Whisk in the clam juice, reserved clam liquid and chicken broth.  Let simmer for 10 minutes.

Meanwhile, scald the heavy cream and milk in a double boiler. 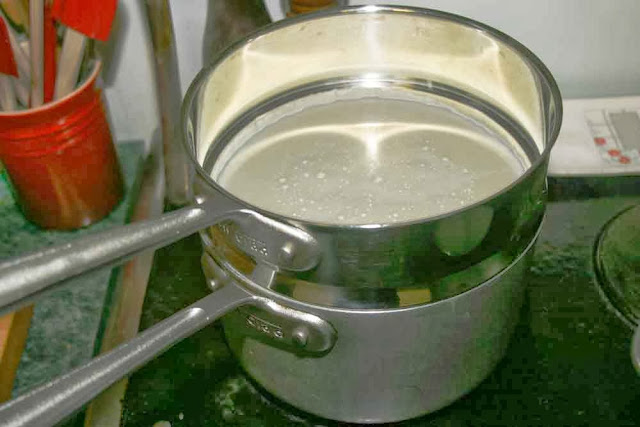 This will not only bring it to temperature, so that it won’t curdle when you add it to the hot broth, but it caramelizes the milk sugars a bit, heightening the flavor of the chowder.  While this heats, dice your potatoes. 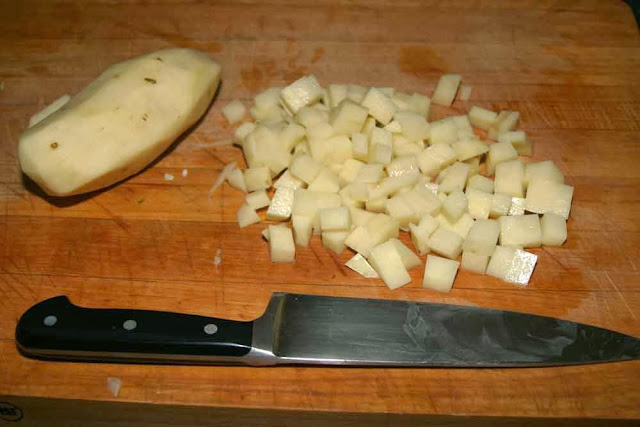 When the cream has simmered for about 5 minutes, (but not boiled) add it, along with the potatoes, bay leaves, thyme, Worcestershire and Tabasco to the soup base and allow to simmer 20 to 30 minutes, until soup has thickened slightly and potatoes are tender. 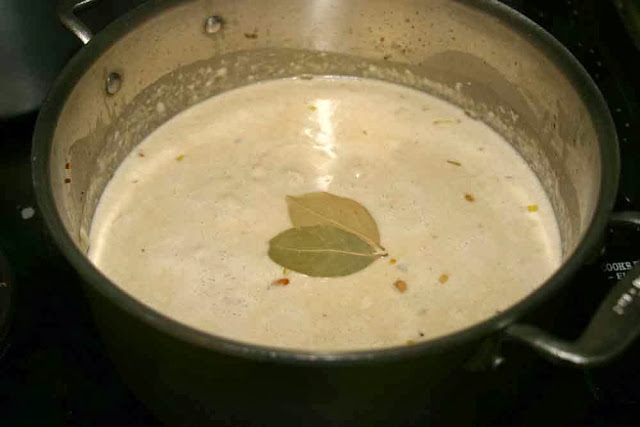 Add clams at the very end and cook an additional five minutes.

Serve immediately with some parsley, the reserved bacon bits, and the oyster crackers. 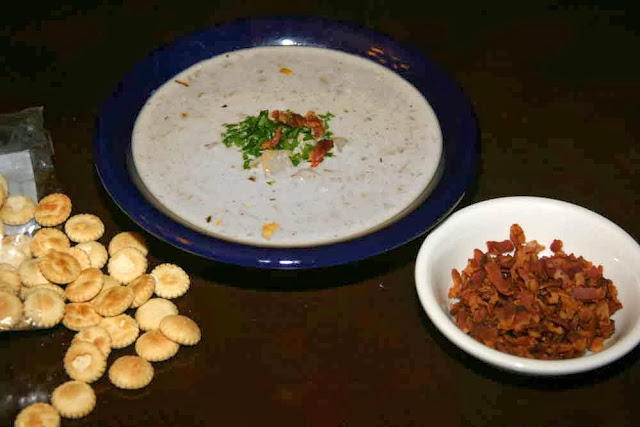 Until next time, Fall in love with Autumn, and this wonderful clam chowdah! 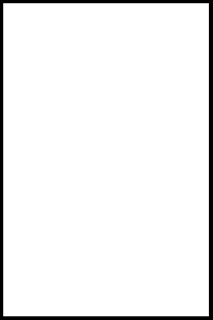 There is perhaps no dish in the world that has the mystique and allure as does chili.  It is a dish that warms hearts as well as bellies.   It is a dish steeped in tradition and yet fraught with controversy.   It is a dish that has inspired many versions and iterations around the nation, some quite strange and bizarre.  Books have been written about chili, and even a play.  And chili was perhaps the first competition cuisine (The first chili cook-offs began popping up at State Fairs in the 1950s) Yet chili was a dish born and bred here in my home state of Texas, and it is the unadulterated Texas version that I was raised on, and that I still love to this day.  It is this version, a version I have painstakingly tweaked over the years, that I present to you here.

It is possible that the stewing of meat with chile peppers was introduced to Spanish settlers in Texas by Native Americans, but however it came to be, by the mid-1800s, chili con carne was all the rage in Texas, from the chili parlors of San Antonio to the chuck wagons on the Chisholm Trail, chili was a preferred dish.  During these times, beef was cheap and plentiful, thus chili was a beef dish first and foremost, and there was no need for filler, which appeared when chili was exported to other parts of the country.

Filler, usually in the form of beans, but also such things as rice, elbow macaroni, or noodles, have also been used.  This is the main thing that sets Texas style chili apart from other styles.  In Texas style chili, beef rules supreme, and thus, filler is frowned upon.  Most competitions around the state don’t allow filler.

Despite this, I’ve found that when canvassing a cross section of friends, a majority prefer beans in their chili.  I have of course had it that way, and it is of course quite edible, but I personally find the flavor and texture suffers a bit.  If you are a bean person, I urge you to try this recipe at least once, just for comparison’s sake.  Everyone should try this dish in its original form at least once. 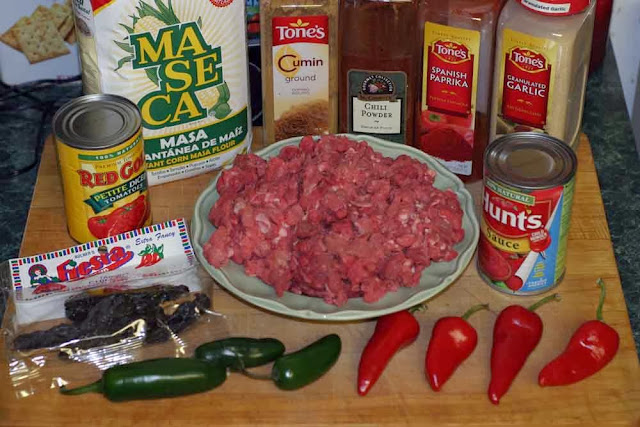 Start by browning the beef in a large skillet or Dutch oven. 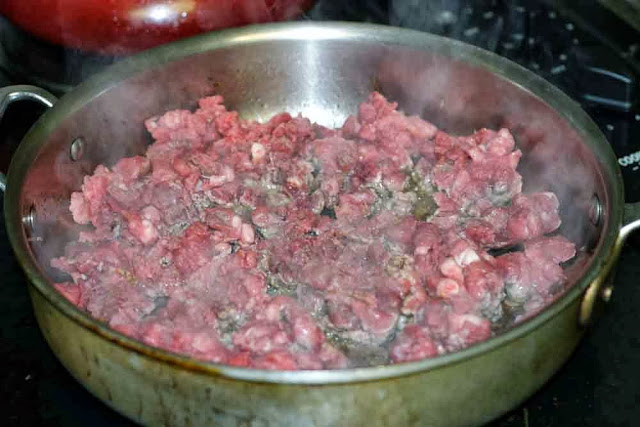 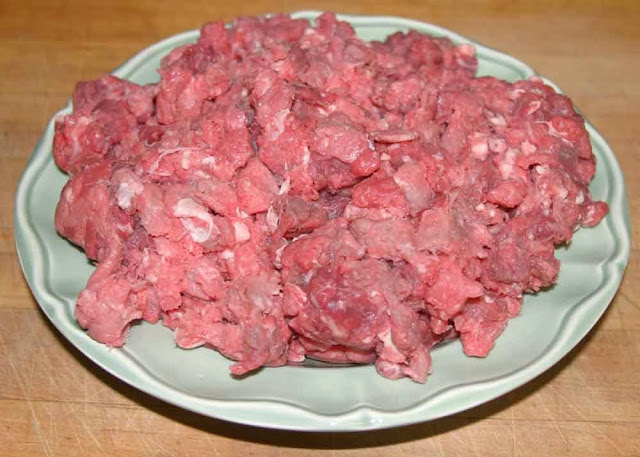 If you don’t see it in the meat section of your grocery store, ask the butcher to grind you some.  It makes a big difference.

While the meat is browning, seed and then soften the Ancho chiles... 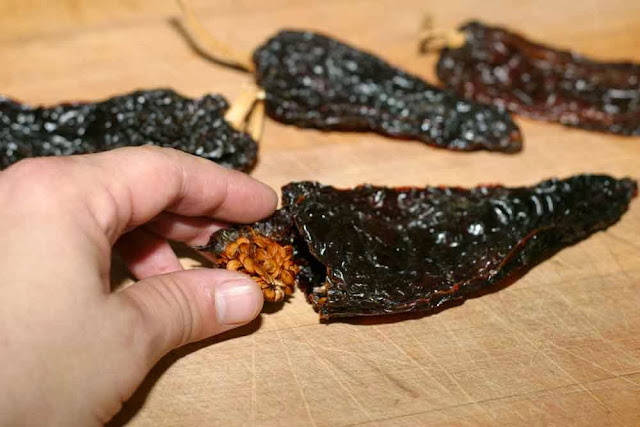 ...by adding them to a small pan of boiling water for five to ten minutes.

After the meat is browned, reserve it, then sauté your onions in a little of the leftover beef fat.  (but just a little, discard most of the fat that renders, otherwise your chili will be too greasy) 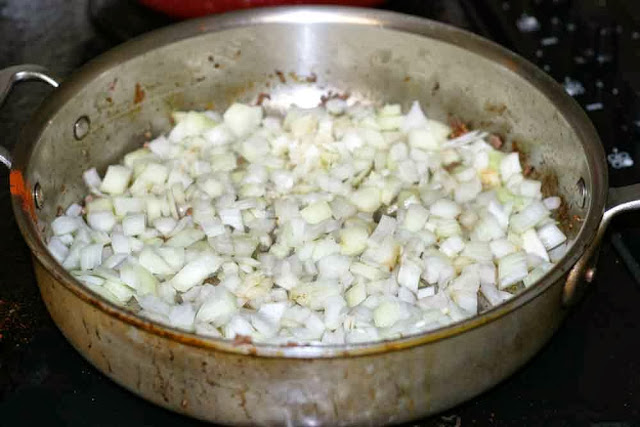 Next, sauté your sliced fresh chile peppers for a few minutes.  For this batch, I’ve used a few jalapenos and a few Fresno Reds. 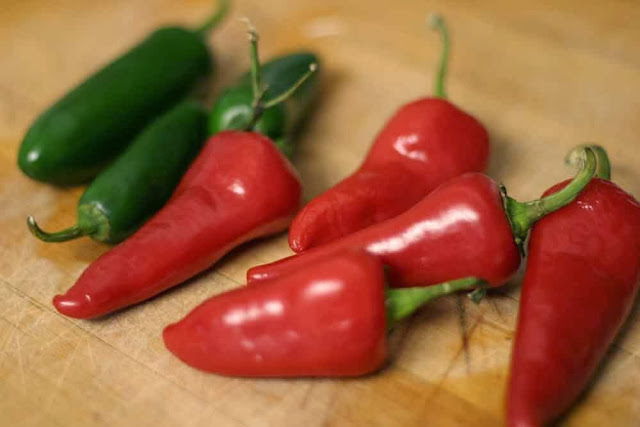 Use what you like here, or what is available.  Both of these peppers are pretty middle of the road as far as heat goes.  I’m mainly using them for chile flavor and not heat.  I’ll use the dried cayenne for that.  Reason being, dried cayenne is pretty consistent, heat wise.  But fresh chiles can be all over the spectrum, particularly the hot ones like fresh cayenne or piquin, and I would never use habanero or similar in chili con carne, such peppers are just too hot and the heat would mask all the other delicate flavors of the chili. 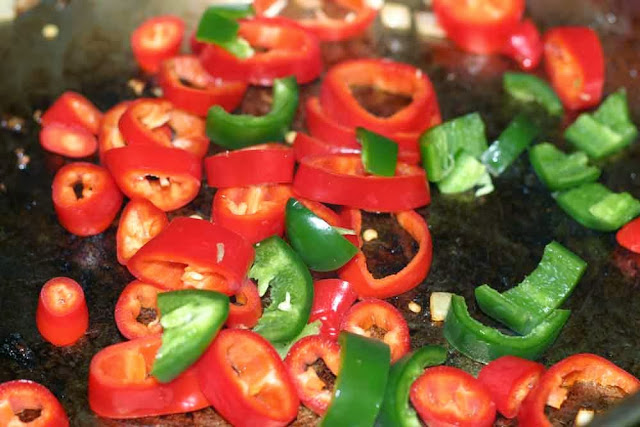 After you’ve sautéd your fresh chiles, pulse them a few times in your food processor until they are minced. 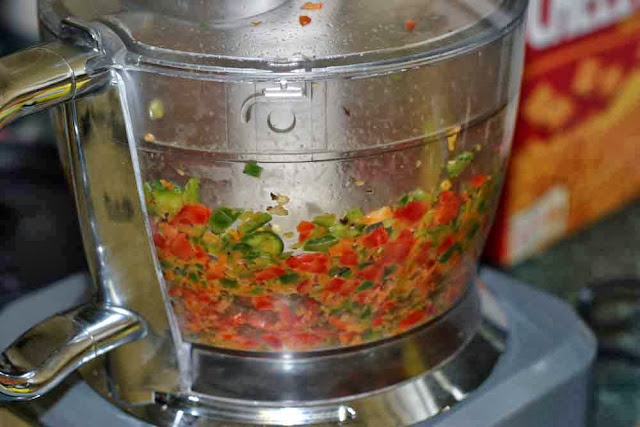 Next, take those ancho chilies that you softened and puree them in the food processor until a paste forms.  You may need to add a little of the water you boiled them with in order to get a proper paste consistency. 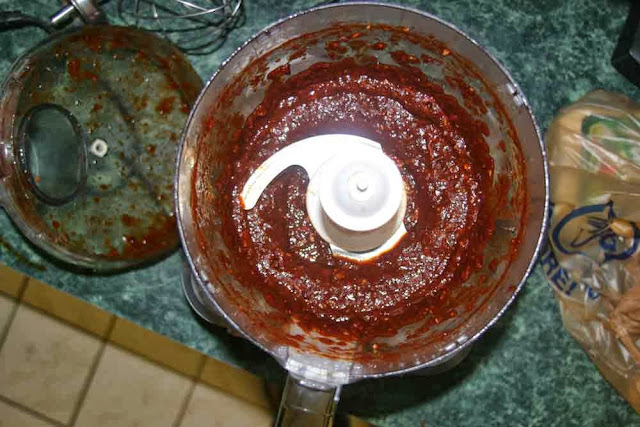 At this point, add your beef, the onions and garlic mixture, the fresh chiles and the ancho chile paste to a large pot or Dutch oven. 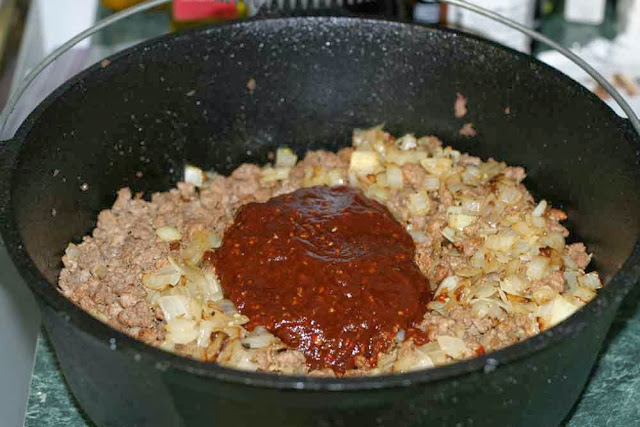 Next, add all the herbs and spices listed above, from chili powder to smoked paprika. 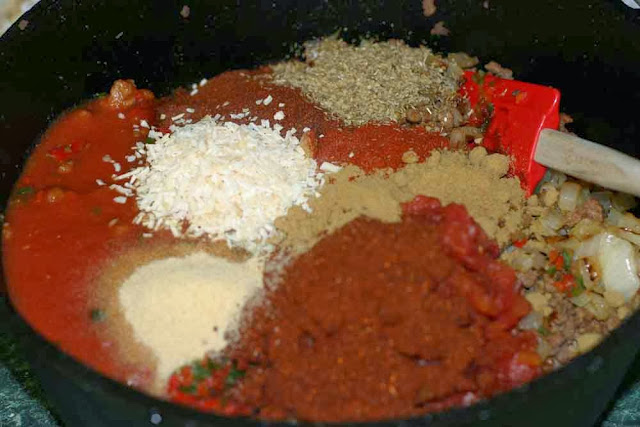 As you add them, you may wonder, why dried onions when we have sautéd fresh onions in the mix?  Why regular paprika when we are also adding smoked paprika?  Why oregano at all?   The answer is that I like to create as many complex flavors as I can in dishes like my chili.  Dried onion will add a different level or flavor to the dish from the fresh onions, so we get two subtle layers of onion flavor in the dish.  The same goes for the addition of fresh AND dried chiles.  In many chili recipes, the only chili pepper that makes it in the dish is from the chili powder that is used.   Chili powder is fine as a base, but for chili to really sing, and to pay homage to the chili of years past, we need to create some complexity, so using the additional fresh and dried chiles is a must.

Finally, add your dried cayenne pepper.  The amount you add is up to you.   If you’re not too keen on the heat, just add a quarter teaspoon or so.  If you like some measure of heat, go for a full teaspoon.  This is what I do when I make a batch to serve to family or guests.  If I’m making it just for myself, I’ll go two or more teaspoons, as I like it hot.  This is about as much as you ever want to add to this quantity of ingredients; any more and you risk masking out your other, more subtle flavors.

Next, stir everything up well...

...and then bring the chili to a boil, then quickly reduce the heat to a slow simmer, and let it simmer, for at least two hours, or several more if possible, stirring every twenty minutes or so.  If you do go long, you’ll develop more flavor, but make sure you keep an eye on the chili and add a little water if it starts to dry out.

For the last thirty minutes of the simmer, mix the masa flour with the ¼ cup of hot water and add to the chili and stir it in. 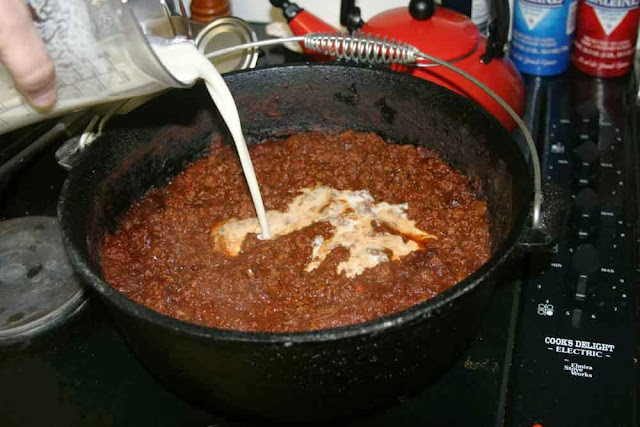 This will help thicken the chili in its final stages, and provide another subtle level of flavor.

Serve the chili hot right off the bat, or refrigerate for up to 24 hours, then reheat and serve.  It actually develops even more flavor in the fridge.  Serve simply, with some Ritz crackers and a little shredded cheddar.   Red onions if you must.   But don’t get too wild with the condiments.  Traditional Texas chili should be enjoyed in its purest simplicity. 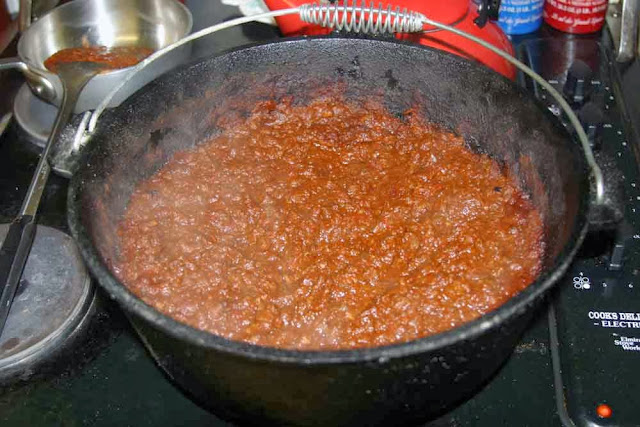 If you're feeling chilly, turn up the heat!