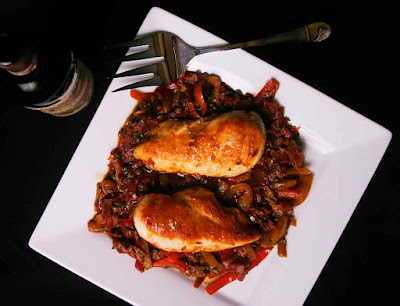 So at the start of all the recipes here on An Eat’n Man I like to tell a little hoopdedoodle  about the dish, you know, its history, origins, interesting trivia, whatnot.  Well, for this dish—I got nothin.’  I’ve searched high and low for info about Roman Chicken, from Apicius to Zed and I got zero.  I’ve found lots of recipes for it on the net, most penned by Giada De Laurentiis.    In fact, after much searching, I was beginning to think that Giada invented the dish herself, but I found a reference on Nigella Lawson’s site that mentioned tasting the dish in Rome in the 70s, so perhaps it does predate Giada.

As to what is particularly Roman about the dish, I think that perhaps this just means it is a dish popular in Rome the city, and not any connection to Ancient Rome.  (The ancients wouldn’t have had access to bell peppers or tomatoes, which are native to the Americas)

Anyhoo, regardless of where the dish comes from, it is a tasty and unique way to feature chicken, so let’s give it a try. 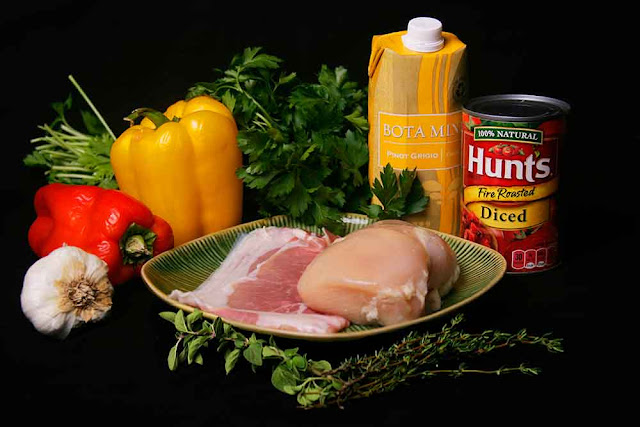 Heat the olive oil medium hot in a large skillet.  Season the chicken with salt and pepper and sauté it until browned but not necessarily cooked through. 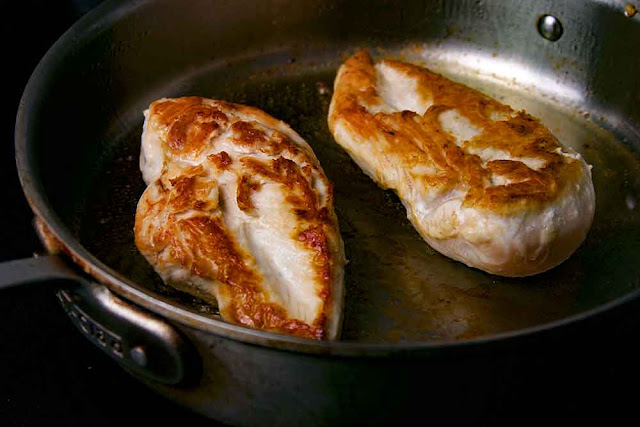 While the chicken is cooking, julienne your bell peppers 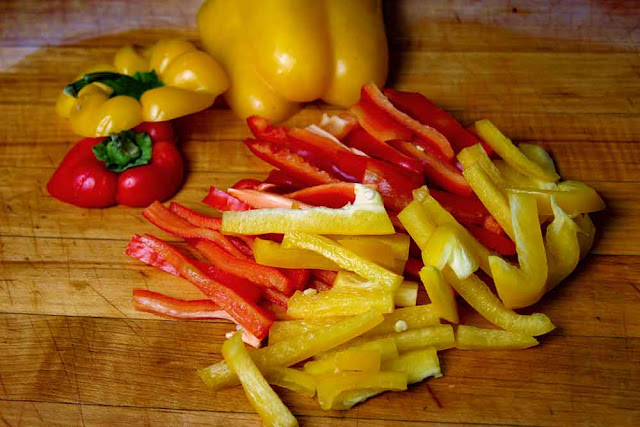 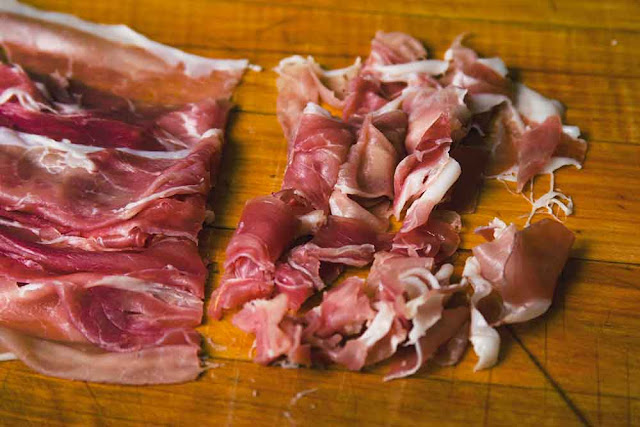 Remove the chicken from the skillet and add the bell peppers and cook until the peppers are soft and just starting to brown. 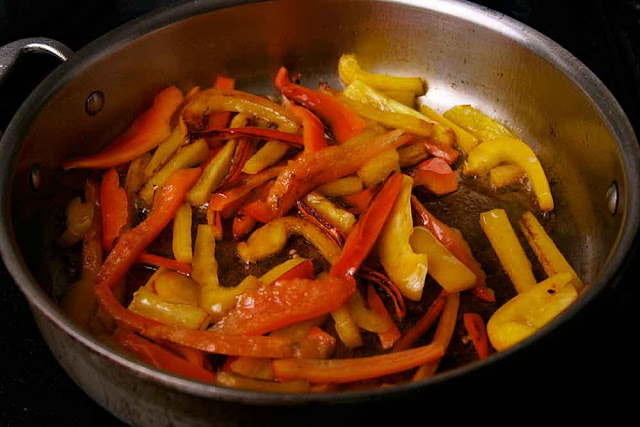 Add the prosciutto and cook for a few minutes more. 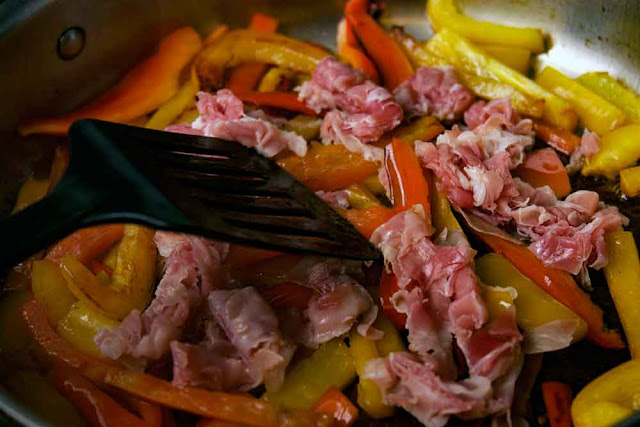 Add the garlic and cook briefly. 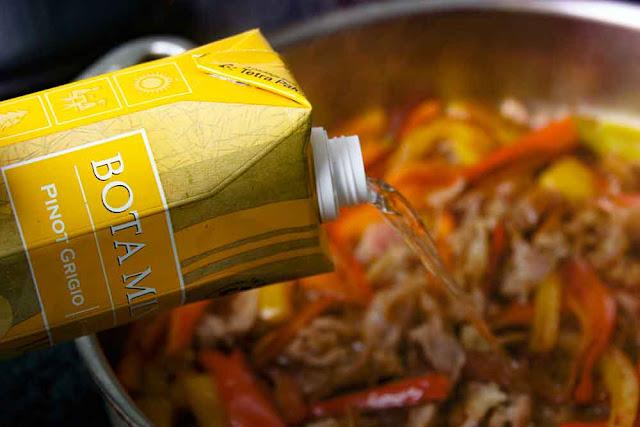 and stir to loosen any browned bits.  Add the tomatoes. 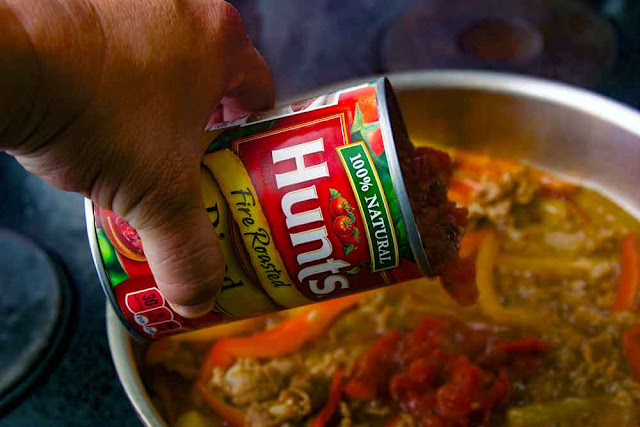 Add the chicken stock and bring to a boil, then reduce to a simmer. 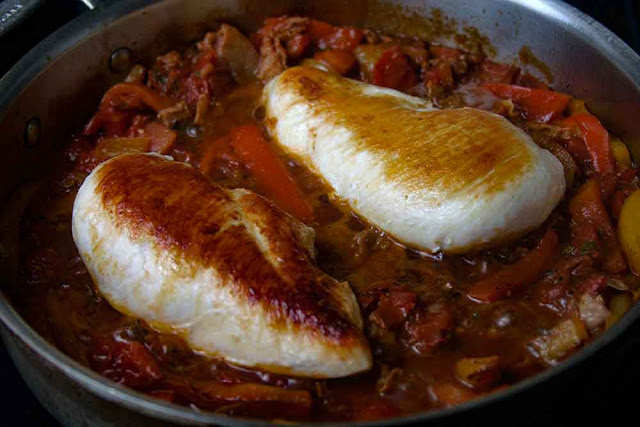 Mince the oregano and thyme. 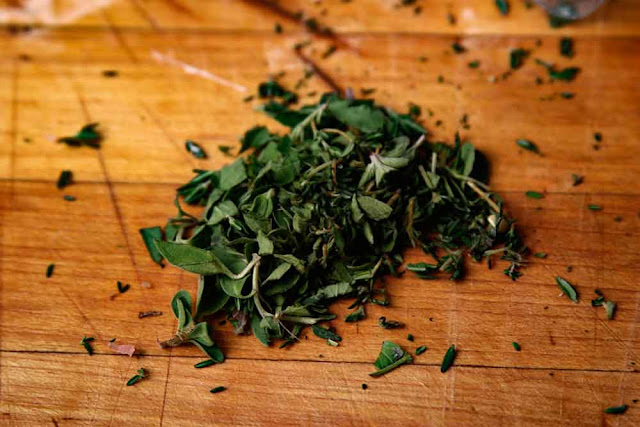 Add it to the sauce. 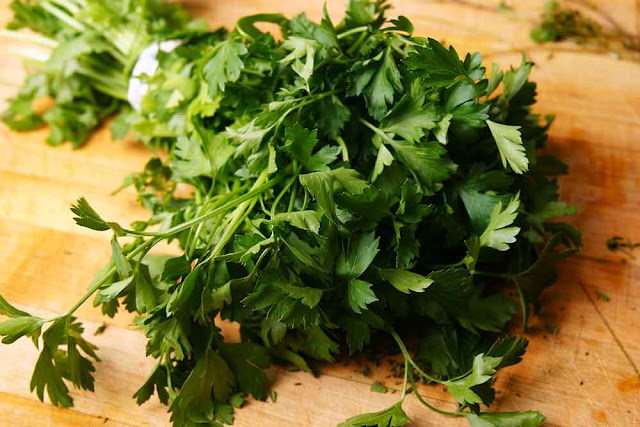 Chop some up fine and add it to the sauce. 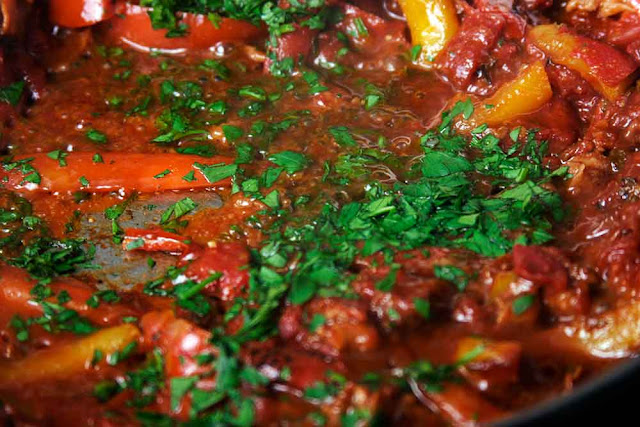 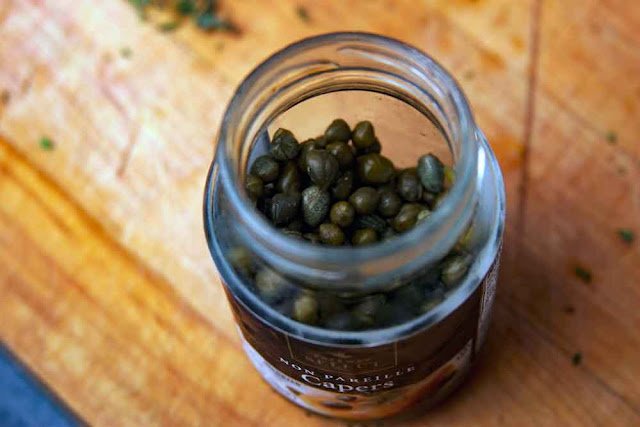 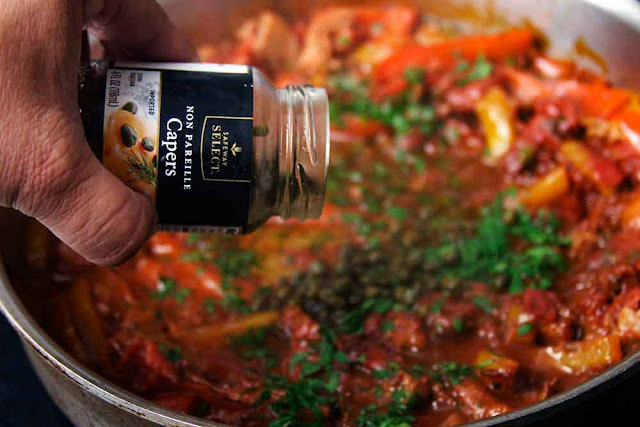 Serve the chicken with the sauce.  Enjoy! 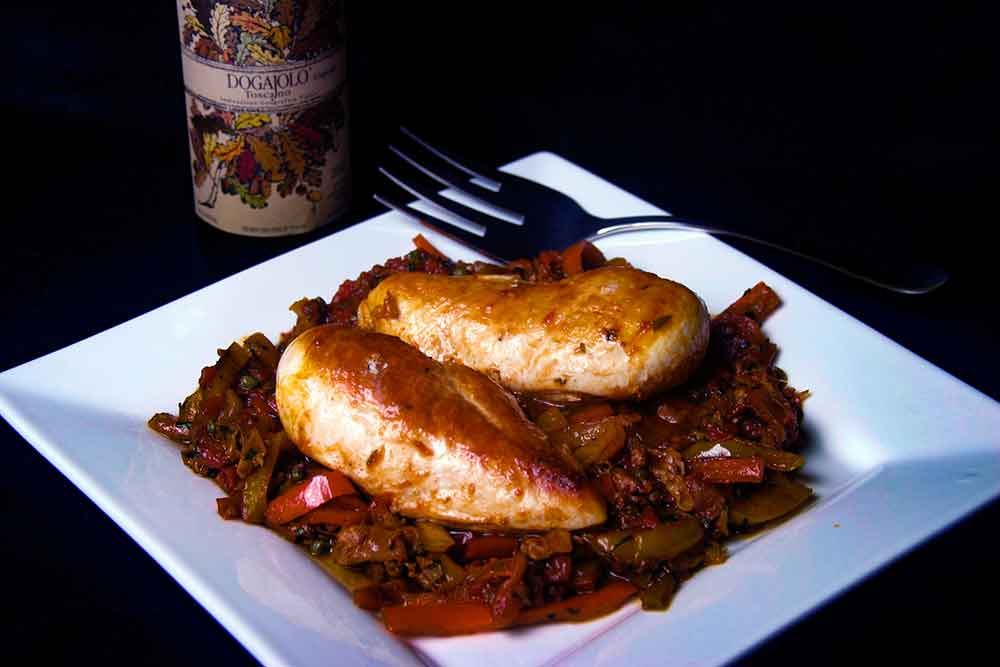 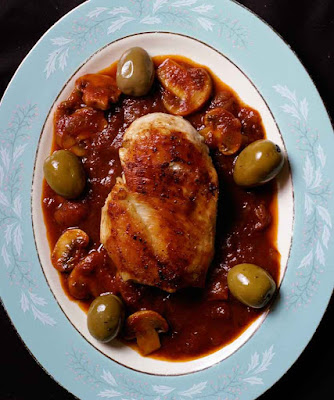 Chicken Marango is one of those old school French dishes that you don't see much anymore, which is a shame, because it's a tasty French dish that departs from the norm by using some predominately Italian ingredients.

The story goes that the dish was invented by Napoleon's chef after the battle of Marango,  Being as the army was in Italy, and were light on provisions, local ingredients were sourced and thus, Chicken Marango was born.  Napoleon was said to have loved it and ate it before (or was it after) every subsequent battle.

Whether this story is true or not is lost in the mists of time, but one thing that is certain is that this recipe has changed over the years, with more modern recipes omitting certain ingredients like eggs and crayfish, and adding mushrooms and red wine.  My version does this as well.  Also, cutting up a whole chicken and using all the various pieces would be more traditional (and perhaps provide a richer, more flavorful dish, with the addition of the dark meat) but tonight it is just the two of us, so I've just done a couple of breasts Marango style.  Sub whatever chicken parts you like. 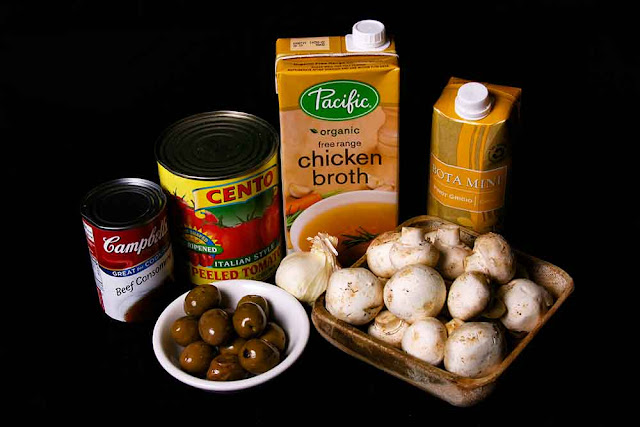 
Heat the olive oil in a large skillet.  Dredge the chicken pieces and flour and then season them with salt and pepper.  Sauté the chicken until golden brown but note all the way cooked through. 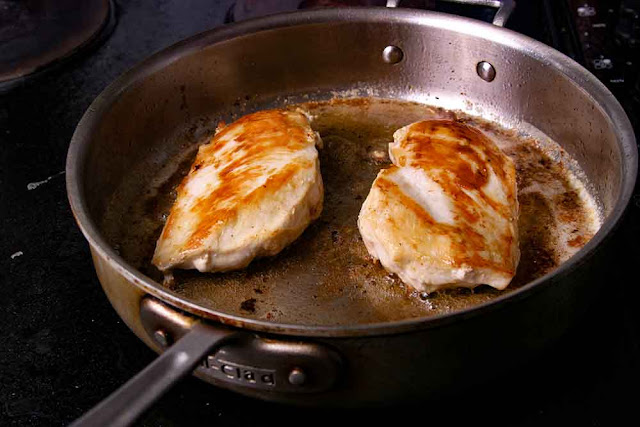 Set aside and keep warm. 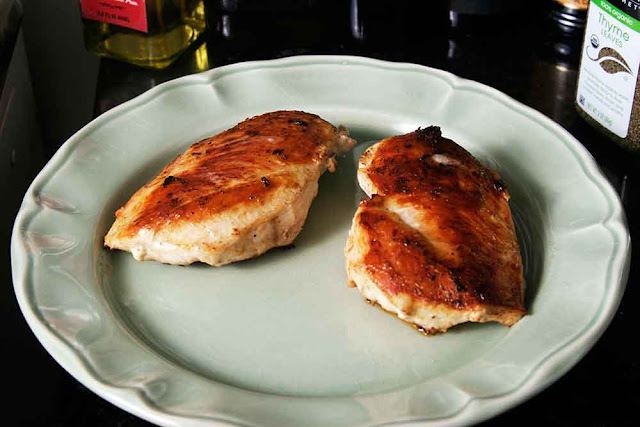 Add more olive oil if necessary and then sauté the diced onion until it begins to turn translucent and slightly golden. 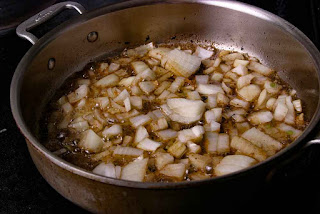 Add the minced garlic at this point and sauté another minute or two.

Add the wine and deglaze the pan at this point. 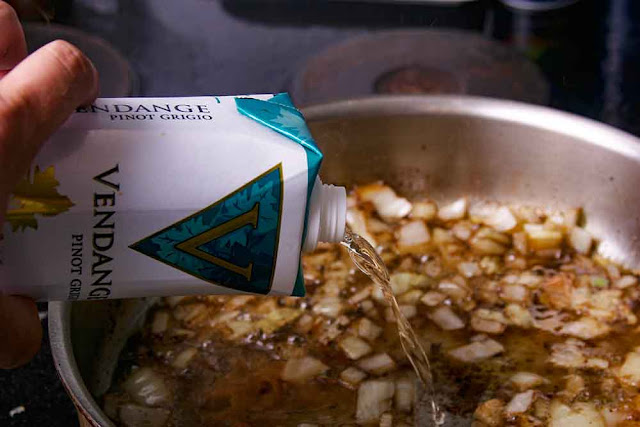 Allow to simmer a few minutes and then add the chicken stock.  When this is warmed through add the beef consommé 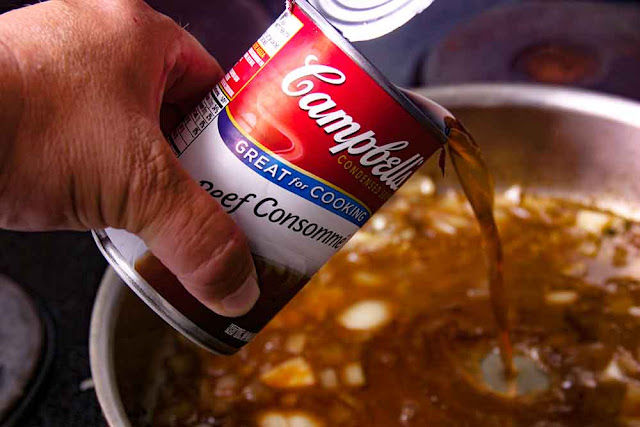 and bring to a boil, then reduce to a simmer.

Add the sliced mushrooms and allow these to cook through.  Add the bouquet garni at this point. 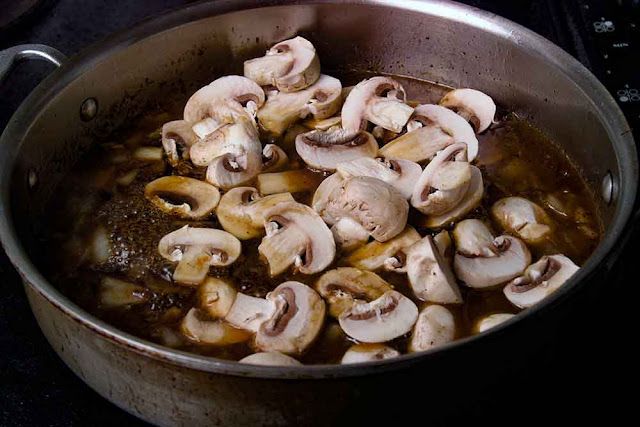 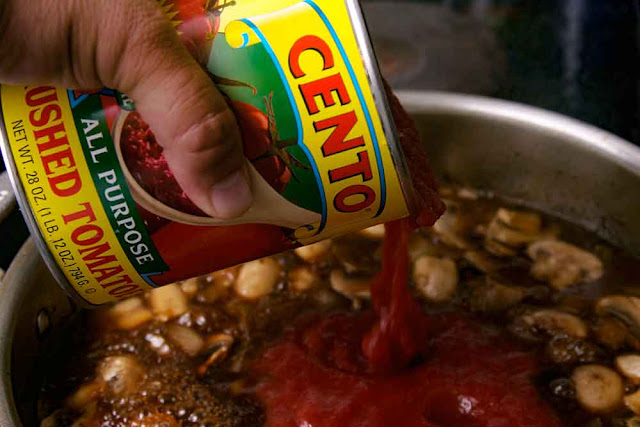 and bring the liquid back to a simmer.  Return the chicken pieces to the skillet and cook through. Sauce should thicken as the chicken cooks, but if it is not to your liking when the chicken is done, remove them and allow the sauce to continue to cook until thickened.  Remove bouquet garni and discard it.

Serve the chicken with the sauce and the addition of the olives. 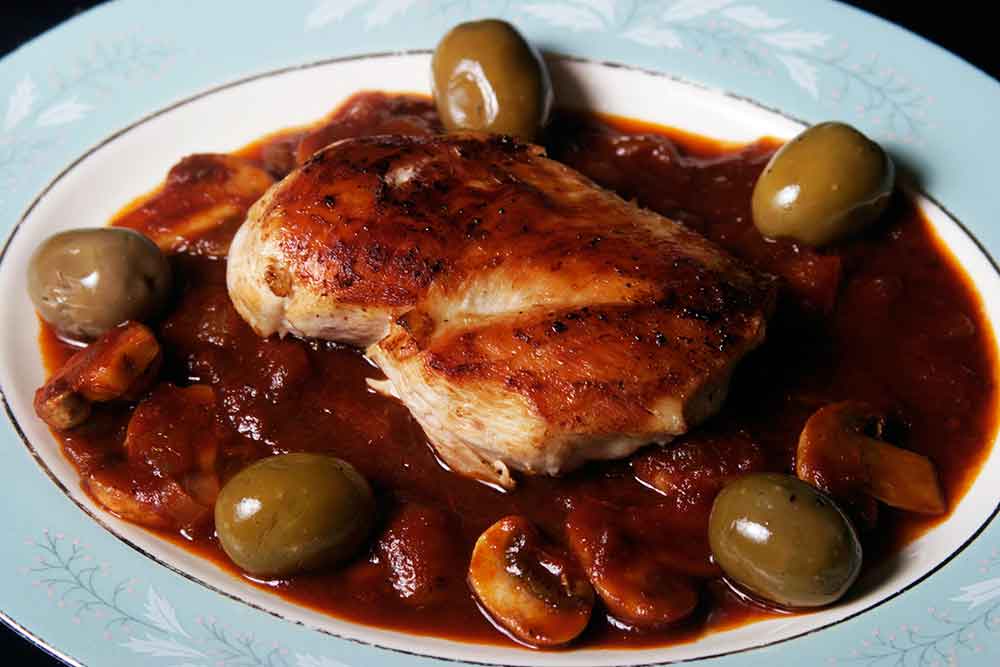 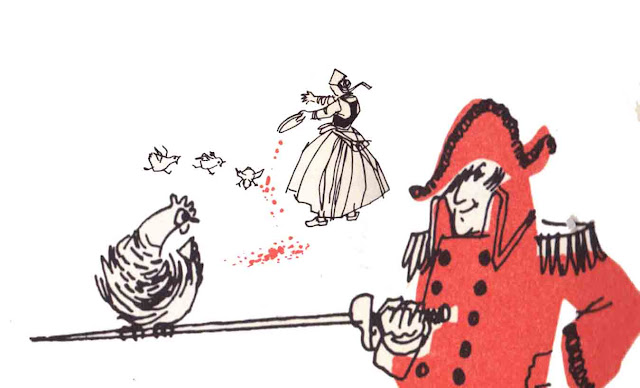