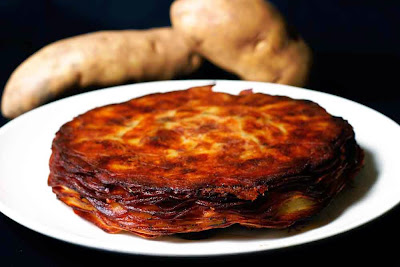 So here's a little treatise on good food photography, which I decided back in 2014 was lacking on my blog.  All the various photos here, except where noted, are mine.  The bad ones are examples of my old ways of doing business here.  The (hopefully) good ones are examples of what I've learned over the last year and a half.

I started this blog six years ago because I love cooking, I love eating and I love writing.  Producing a blog such as this gives me excuse to do all three.  Of course I'd be doing those things anyway (All three are necessary to life, at least for me), but my An Eat'n Man blog allows me to do all three a bit more decadently and gourmand than I might otherwise cook and dine (and write about it), at least on a regular basis.

So the blog came forth, and it turned out to be a fun thing to share with friends on Facebook, and a convenient repository of my own recipes.  If someone asked for say, my Mashed Potato recipe, I could just refer them to the blog. 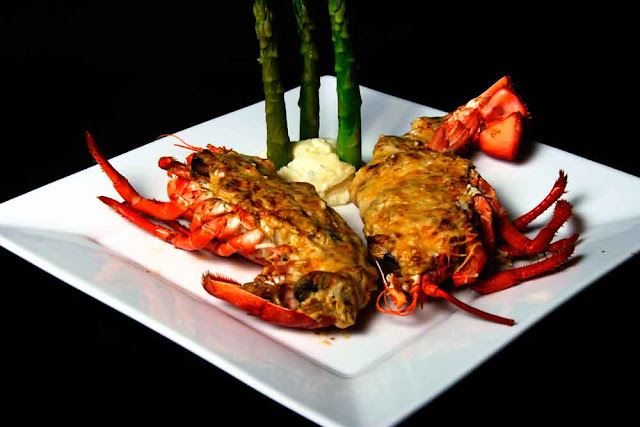 An Eat'n Man has grown a bit over the years, steadily averaging around 20-30 hits a day until recently.  Now I'm getting about 150 hits a day, mainly thanks to adding the bulk of my recipes to the Yummly Recipe Search Engine.  But I like to think that another thing has happened to give my blog a little more street cred--its photography.

Yep.  About a year and a half ago, I was perusing some food blogs and it occurred to me, most of my photos suck compared to a lot of other blogs out there.  Sure, occasionally I'd get a decent photo, but nothing like the awesome professional shots on sites like The Pioneer Woman, FXCuisine and others.  I began to lament this.  I also decided to do something about it.  I began researching food photography, studying it in detail and gathering together some simple, relatively inexpensive equipment. 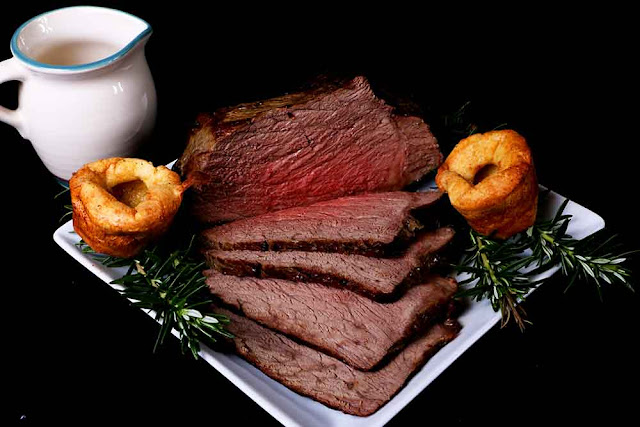 What I noticed, once I snapped that first pics with the new gear, was how incredible my photos started looking.  They are still not perfect, but they definitely have a quality that makes me much happier with them.  Once I started using the new gear, I knew I had to pretty much abandon everything I'd already shot, which amounted to over 50 recipes/cooking sessions.  I wanted there to be a clear transition line between the old, crappy photos, and the new, much better looking ones.

I've still got a ways to go.  The photography is better, but I'm still working on food stylings (arranging the plate and props to look pretty), but I'm getting there. 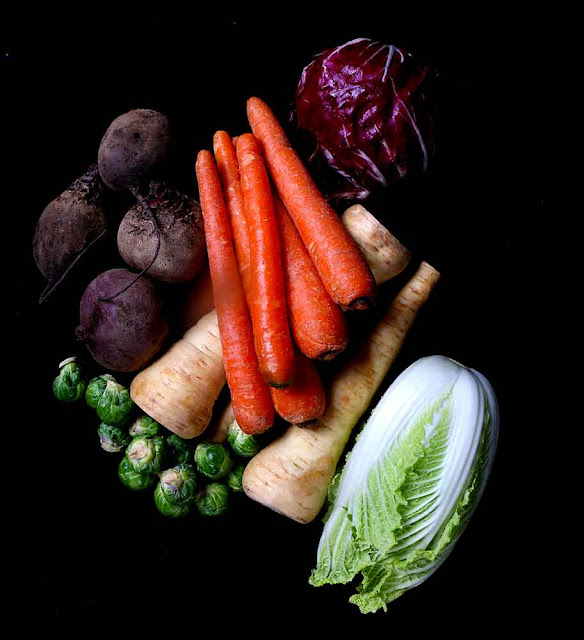 Anyhoo, for your viewing pleasure, I've decided to make a little collection of photos comparing the same or similar subjects--old, bad technique vs new, good technique. 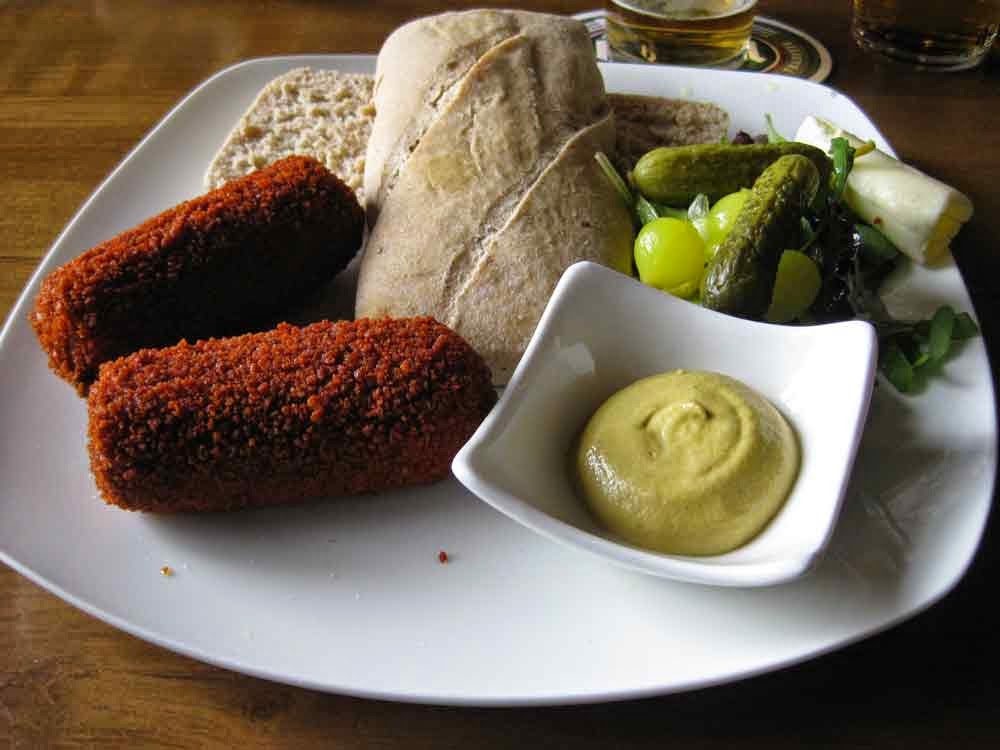 This is one I actually got 'accidentally,' long before I started my quest for better photography.  It was taken in a restaurant in the Netherlands and was lit by natural light streaming in from the window.  This (I've learned) is actually some of the best lighting you can get.  If you like taking pics of your food and posting them on Facebook--start asking to sit by the window.  You're pictures will be instantly better.

Compare that picture above with a similar photo from my on version of Dutch Croquettes. 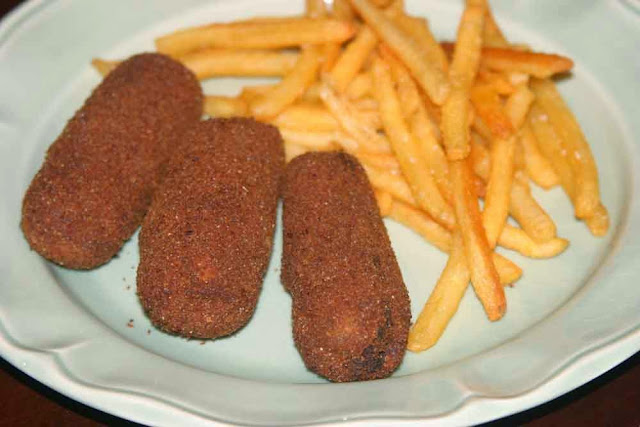 Note how the on-camera flash and the yellowish light in my dining room have made this picture look overtly yellow, and sort of flat and two dimensional.   Also the styling is sorely lacking.  The first photo has garnishes and you can see the glasses on the table and so on.  This one I'm almost embarrassed to have on my blog now.  Part of me wants to go back and rephotograph some of the older recipes.

This highlights secret number one and two to good food photography--good lighting and nice presentation.  The first photo has both--the second has neither.

When natural light isn't available, the next best thing is flash photography, but I'm not talking about that pop-up flash on your camera, I mean studio lighting--in this case, strobes.  Surprisingly, entry level stuff is not as expensive as you'd think.  I picked up a pair of strobes with stands, umbrellas and case for under $150 total, and this has single-handedly improved my food photography tenfold. Consider the photo below of a bowl of strawberries I took using the on-camera flash. 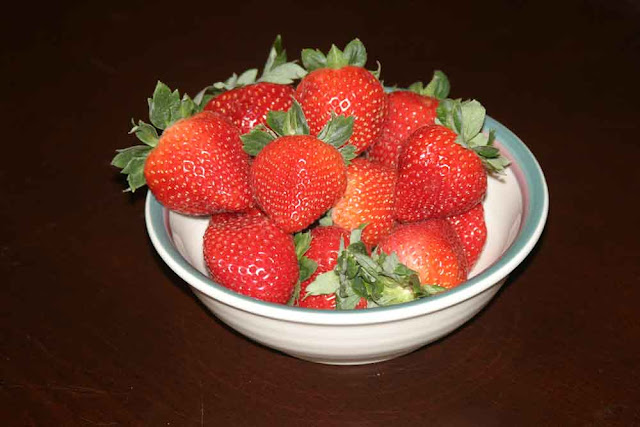 Not bad, but it looks sort of flat and lifeless.  That's what having your lighting source lined up with your lens does--there are no shadows to help define the subject.

Now look at this one I took of the same bowl of berries using a single strobe light off to one side at about 45 degrees. 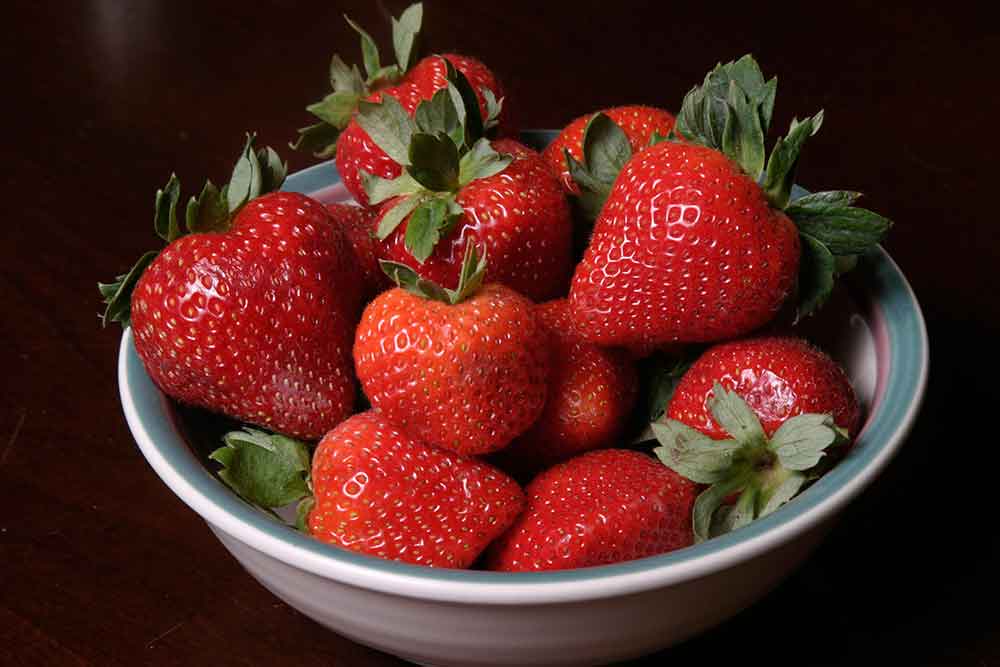 Way better, right?  The berries seem to pop right out of the picture in 3D.  They have texture and surface and you can almost feel the little bumps and seeds as you visualize popping one into your mouth.  This is what good lighting from the proper angle does.  It brings out the proper colors of the subject, and also gives it depth by painting your image with both light and shadow.

Here's another example, from the shoot for my Lobster Thermidor recipe.  First, a photo of the principal ingredients shot in 'auto' with the on camera flash: 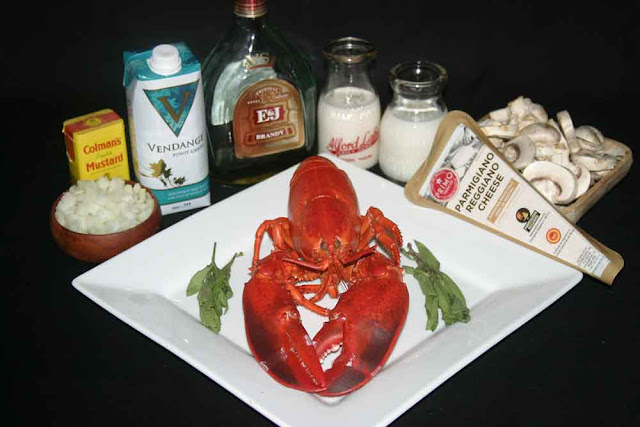 Once again sort of flat and lifeless.  Note the lack of shadows.  Now compare that to this photo, below, shot in manual with studio strobes: 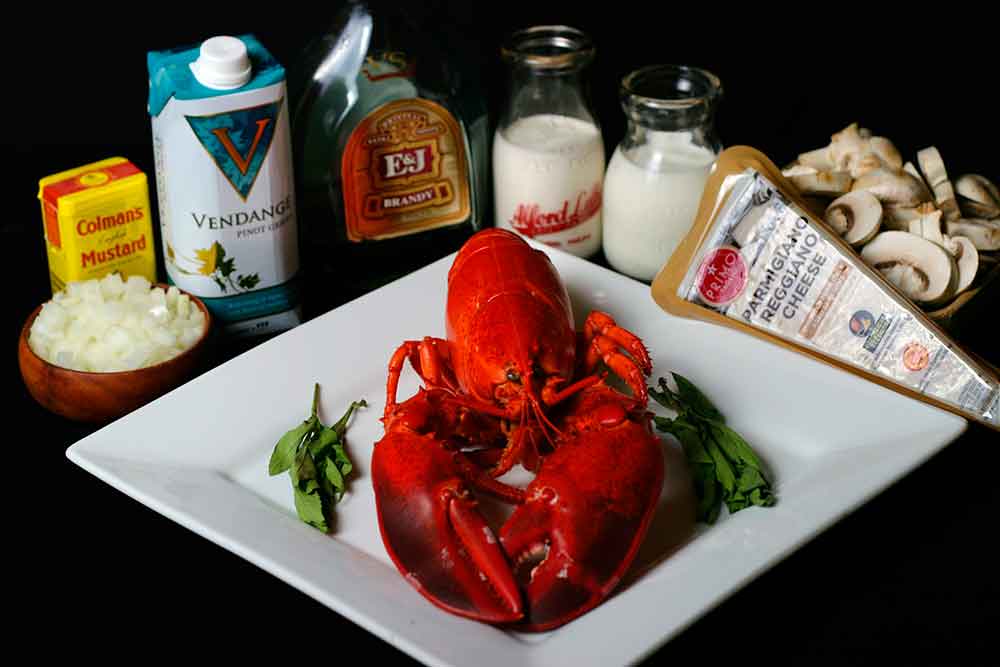 Much more depth, and also a richer, more contrasted photo as well.

Note, in both sets of photos above, neither subject's presentation or 'food styling' is that great, but it seems better in the second if each photo, because each individual element stands out better.  Once again, light and shadow at play.

Here's one more set of photos to illustrate the point.  A simple 'still life' of some eggs and cutlery. 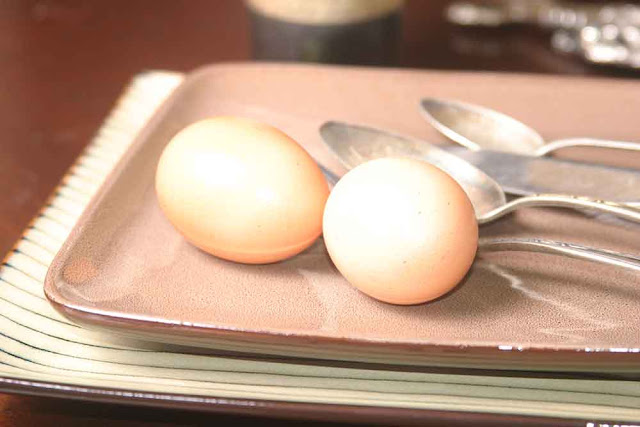 See how washed out and flat this first one is?  It was taken with the on camera flash.   While the second photo... 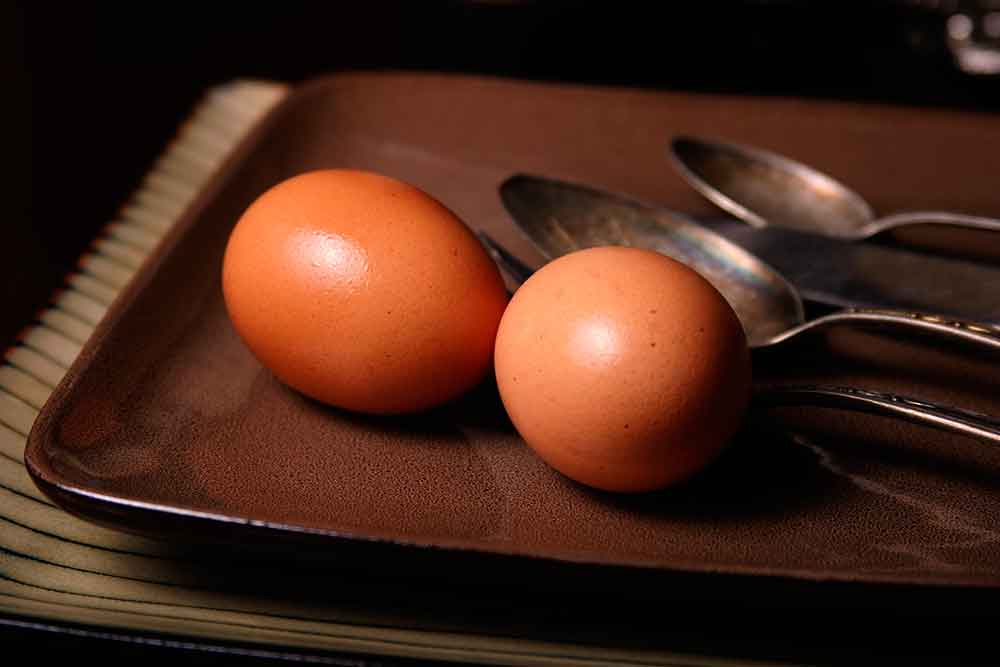 ...looks completely different.  This one was taken with the strobe lights, and everything is much richer and deep--you can even see texture on the otherwise smooth egg shell surface.

So, while I'm not producing 'Southern Living' magazine cover quality photos, I do think I have improved substantially.  All for a little research and practice and under $200 worth of equipment.

Speaking of, here's my set up: 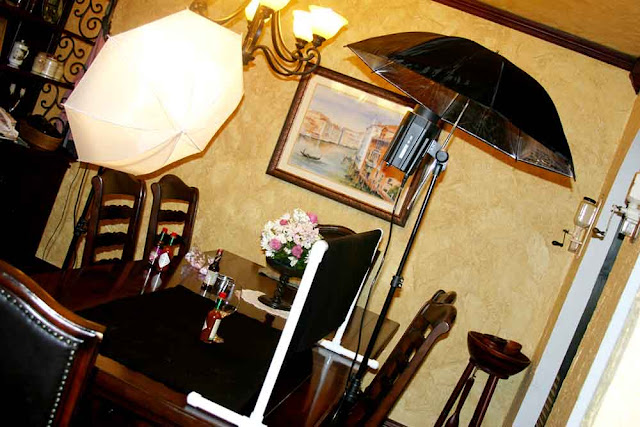 It includes the two strobes, stands, umbrellas and a wireless trigger for the camera.  Also there's my tabletop backdrop. 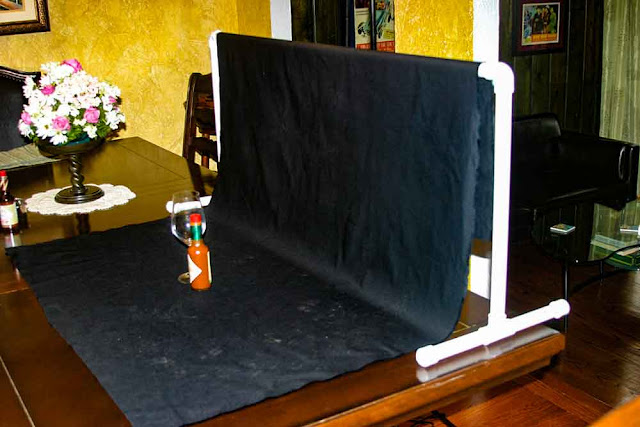 I priced some of these for over a hundred bucks, so I just built my own out of PVC pipe and a bolt of black cloth from the fabric store.  Cost under $10.

So, that's my process.  Hopefully I'll continue to improve as I learn more.  If you're interested, I got most of my knowledge from two very helpful sites.  The first is FXCuisine, which was the food blg that made me want to have my own food blog.  He doesn't update it any more, (correction, he just started updating again--Yay!) but his archive is well worth reading.  Here's his page on how he shoots food, which is what I've tried to emulate.  The other helpful site is a place called Strobist, which was invaluable in my learning how to use these lights.  Thanks to both these sites.

And now, to bid you farewell, a couple of photos of our cats (also taken with the strobes--the cats are always curious what I'm doing and like to investigate when I'm shooting photos, so I was able to get a couple of good ones of them before they got bored and went away) 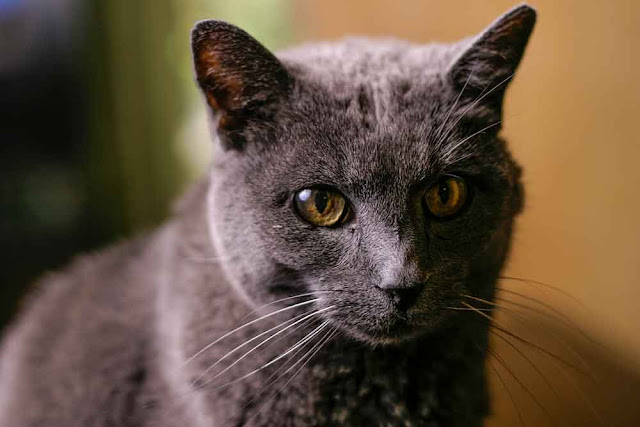 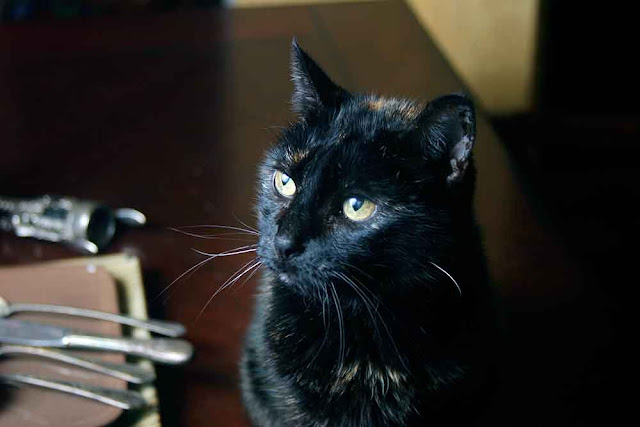