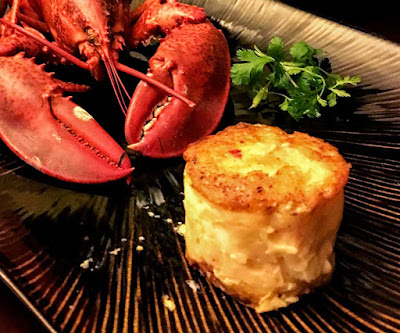 You've had surf and turf, how about surf and...surf!  That's right, it's not Lobster and Steak this time, but a Lobster Steak, i.e. a steak made out of lobster meat.  Sounds strange, but bear with me.  I stumbled across this unique recipe a while back while mindlessly surfing cooking sites, as I am wont to do.  When I came upon this one, a creation of famed chef David Burke, I knew I had to try it.  I decided I'd surprise the wife with it on Valentine's Day, but just to be sure I was up to the task, I made it a couple of times on the sly first to make sure I had the process down.  It's relatively simple on the ingredient side of things, but is a bit of a chore in the making--this one is all technique.  What I ended up with was, my friends, perhaps the best lobster dish I've ever eaten, and that's coming from a guy who frequents the coast of Maine.  Yes, it was that good. 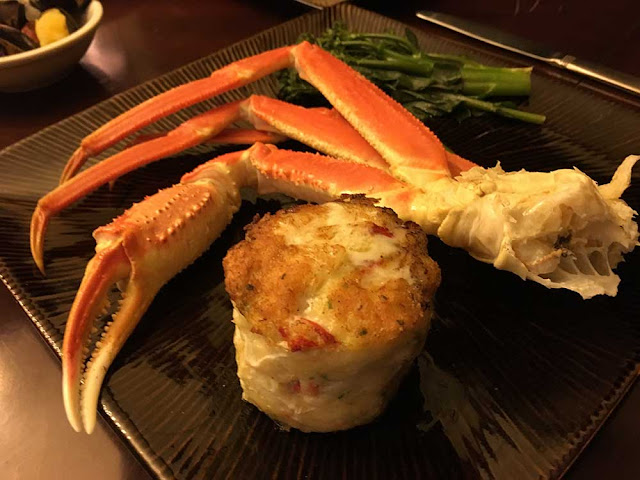 But, the recipe itself on the site where I found it, while having some nice pics, didn't really do a great job fleshing out everything you need to do to make this dish.  So, I decided I'd share my experiences making it here on the blog for the benefit of all mankind. 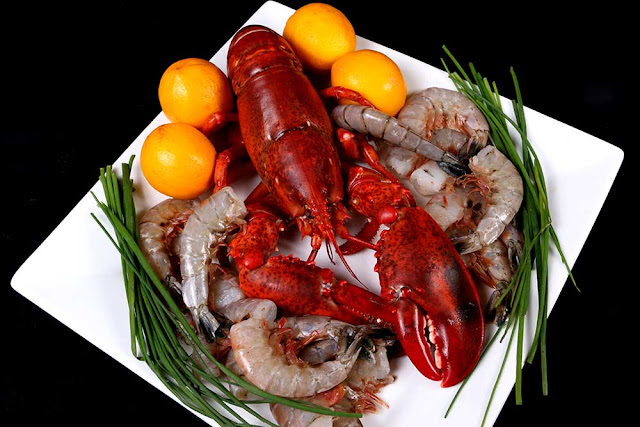 Pretty simple on the ingredients list, eh?  So basically we are going to form a 'steak' of of our lobster's meat, using the shrimp and butter to make a paste to glue it all together.  Then we're going to treat this assembly like a piece of beefsteak and sear it, then finish it in the oven.  Sounds wonky, and I know you're thinking, will that mess stay together, or just dissolve into a pool of fruit de mer?  Well, that's what I thought, so much so that the first time I made these, I did one as the recipe specified, then another with a binder of egg and cornstarch.  Turns out the recipe worked fine as designed.  No need for the binders.  The secret is chilling the 'steaks' in the fridge for an hour or so to get 'em firm before you sear them.  Anyhoo, let's get started.  Allow yourself a few hours to make these before your planned dinnertime.

Fire up your lobster pot with enough water (and a bit of salt) and bring to a boil. 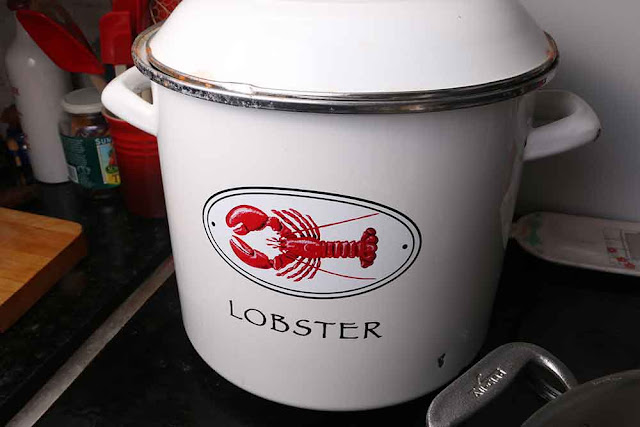 Make an ice bath in a large enough casserole dish or similar and place next to stove.

Blanch the lobster in the boiling water for two minutes, and no more.  We want to just set the meat and then stop.  Chill the lobster immediately in the ice bath to stop cooking process. 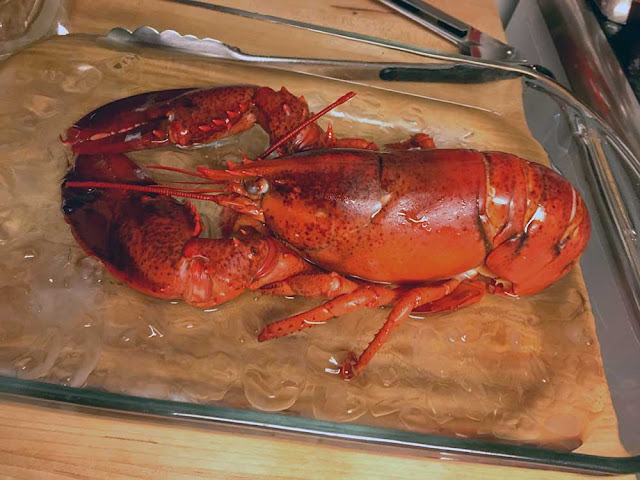 Let lobster sit in the ice until cool.  After that you can refrigerate him until you need him.

Peel and de-vein the shrimp.  Place them in your food processor. 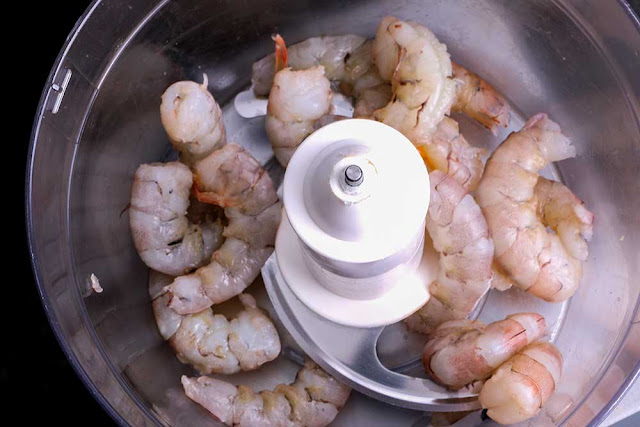 Pulse until shrimp are coarsely chopped. 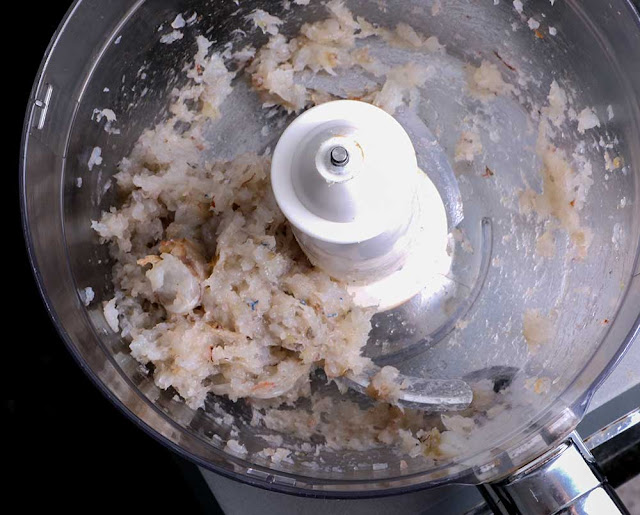 Zest the Meyer Lemon over the shrimp.  (You can use a regular lemon if necessary, but I prefer the flavor of the Meyer) 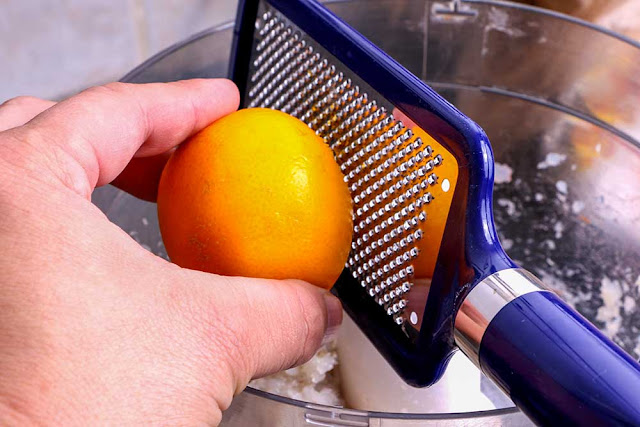 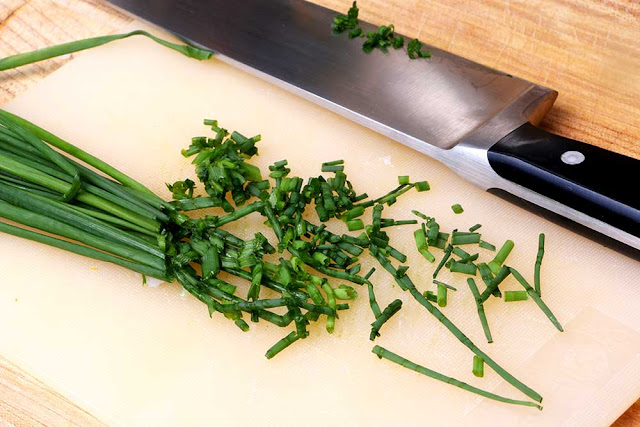 Then add them to the food processor with the one stick of butter. 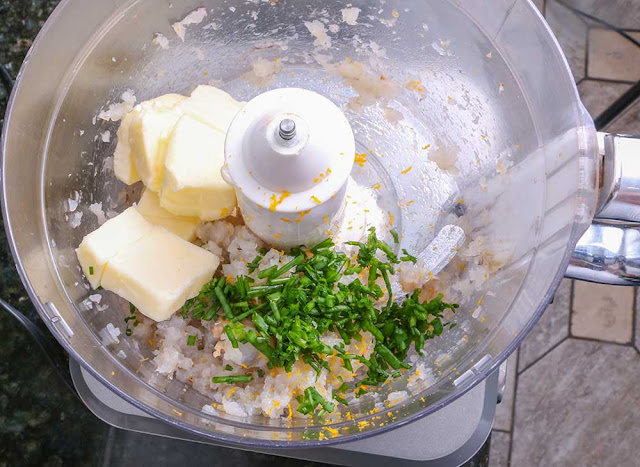 Season with salt and white pepper in the amount of your liking, then pulse until a creamy paste forms.  Don't completely puree the shrimp meat; you want some visible granules of meat to still be there. 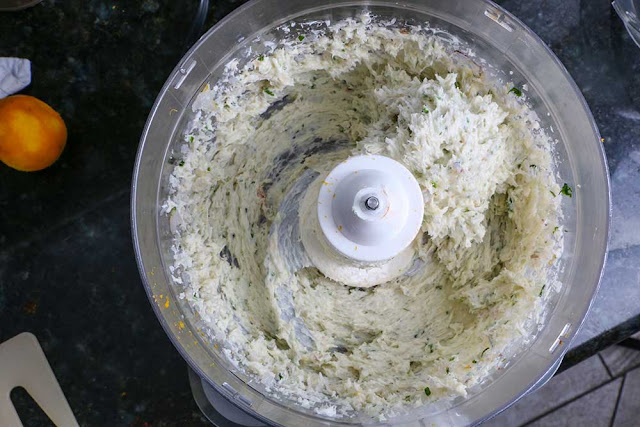 Next, break down your lobster.  Remove the tail meet from shell. 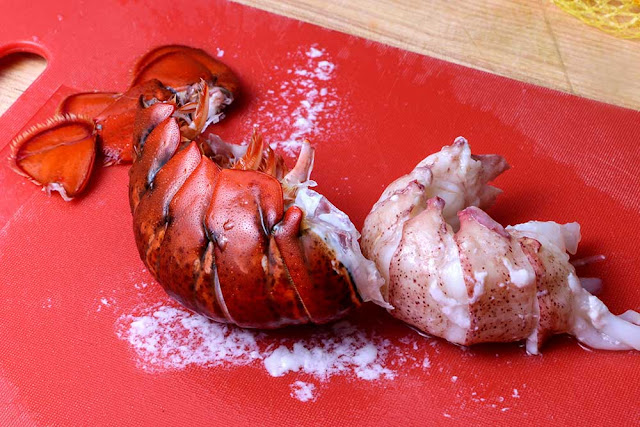 Then do the same with the claw and knuckle meat.  Coarsely chop the lobster meat. 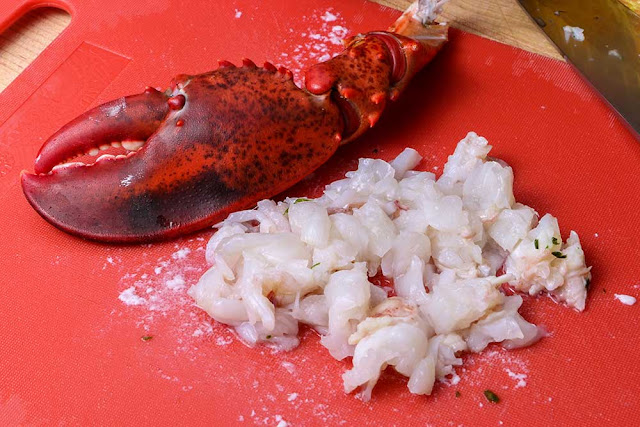 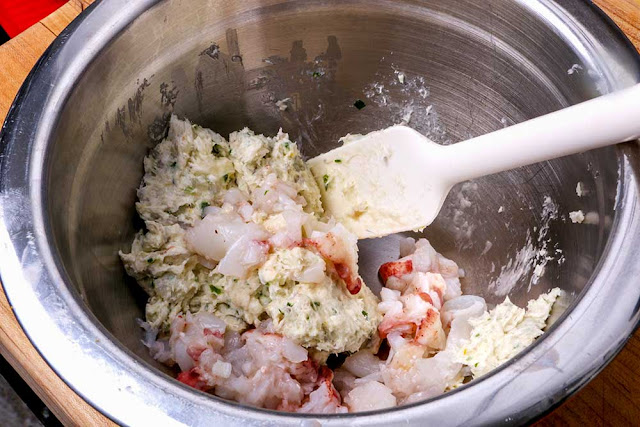 Now we're ready for our ring molds.  You will need two, as this recipe should produce enough filling to make two steaks.  We have this nice ring mold set that comes with a plunger and base that make it easier to pack the molds full, move them, and then remove contents when ready. 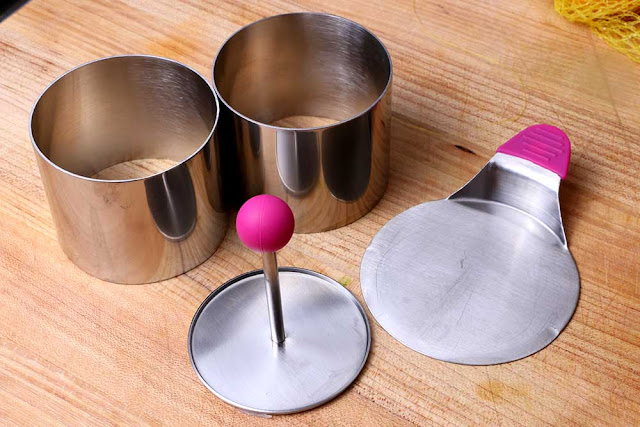 Spray the inside of the ring molds with Pam or similar cooking spray.  This will help the steaks release later on.  Loosely fill each mold with the lobster/shrimp mixture until it is heaped over the top of the mold. 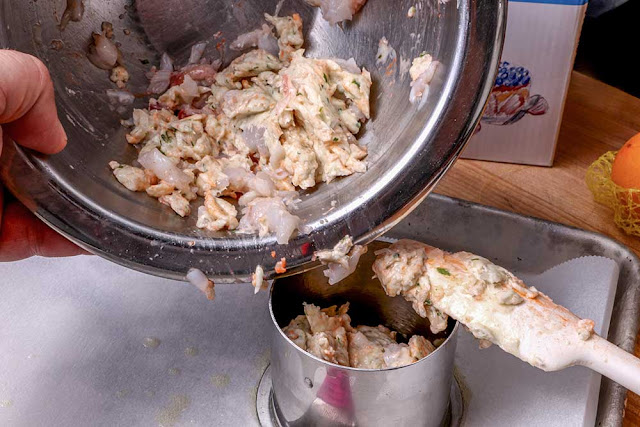 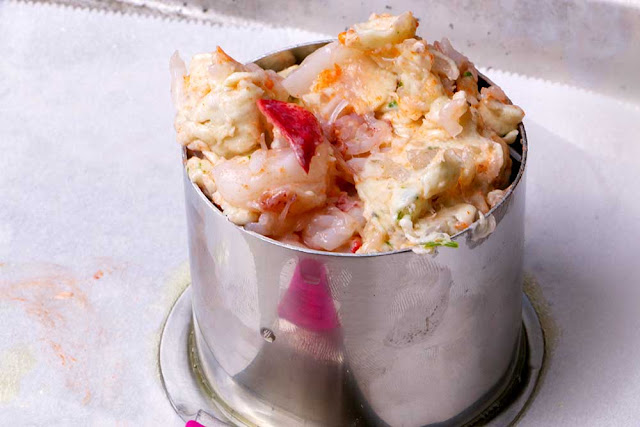 Use the plunger, if you have one, to press the mixture down into the mold tight.  Otherwise a spatula works fine. 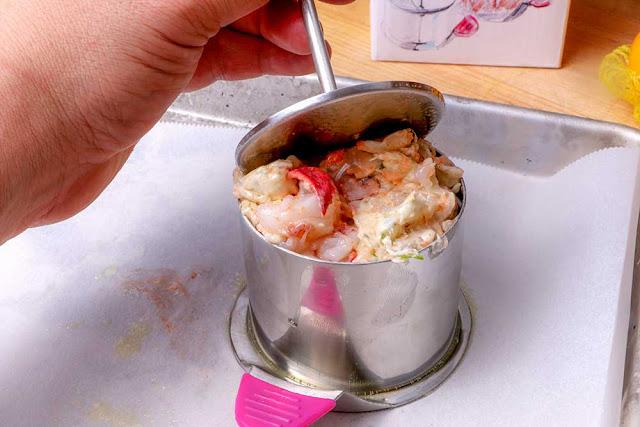 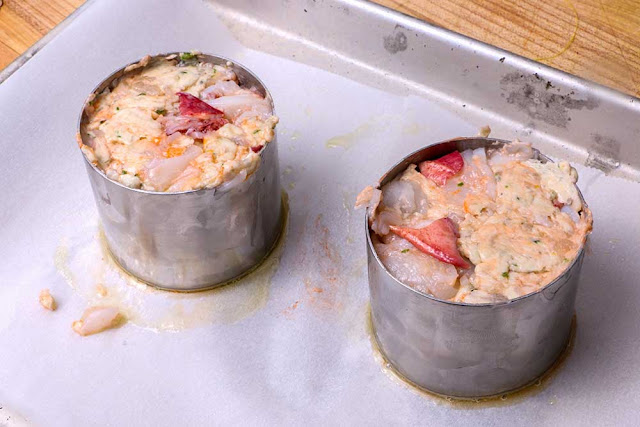 Place tray with ring molds in fridge and refrigerate for one hour or a little longer.

Now chill out.  Have a glass of wine.  That's probably what I'm doing right now.

Now, we need some tools.  Specifically something to help us remove the steaks from the molds, and some foil and cooking twine. 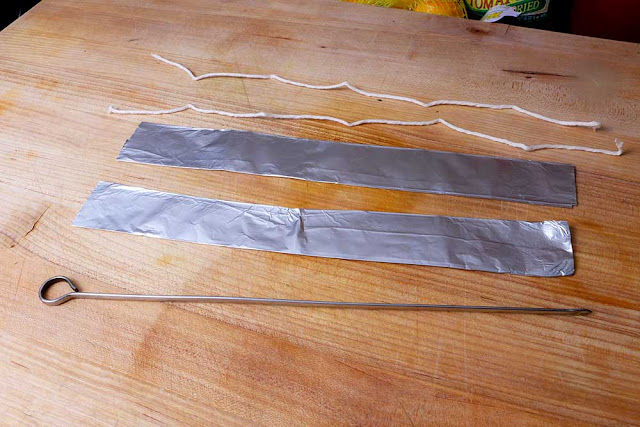 The recipe on the blog where I found it said to use a knife and run it around the inside of the molds to help them release, but even a small knife can really mess up your handiwork, so instead I used a thin metal skewer to do the trick.  I sprayed it with Pam first and then ran it around the inner edge of the mold. 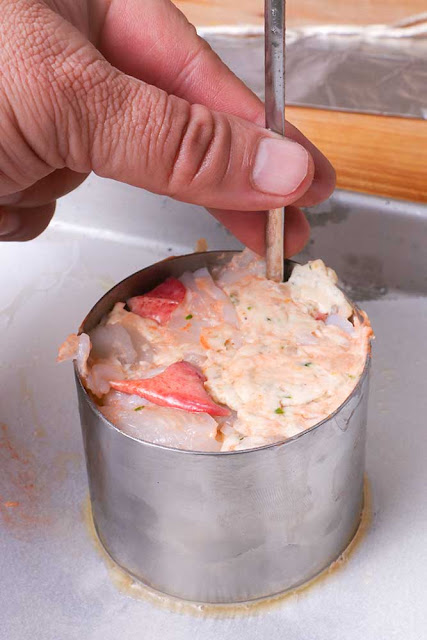 Carefully remove ring molds after you've done this.  I found the plunger came in handy for this process, pressing down gently with it while I lifted the mold, leaving the steaks behind. 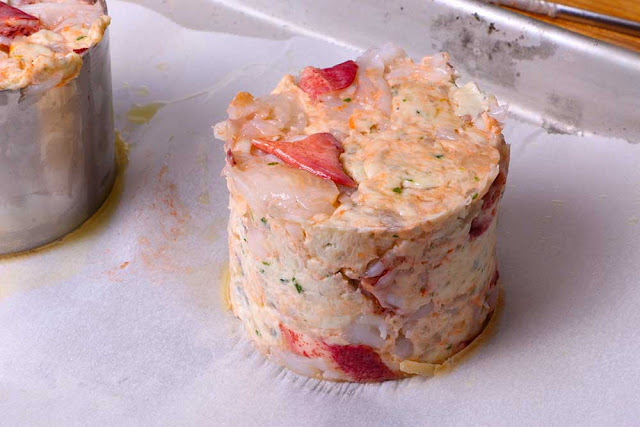 Next we need to make sure the steaks don't come apart while we're cooking them.  Tear off about four inches of foil and fold it into a strip just a little less wide than your steak is tall.  Wrap a strip of the foil around each steak and tie it on snug but not too tight with the cooking twine. 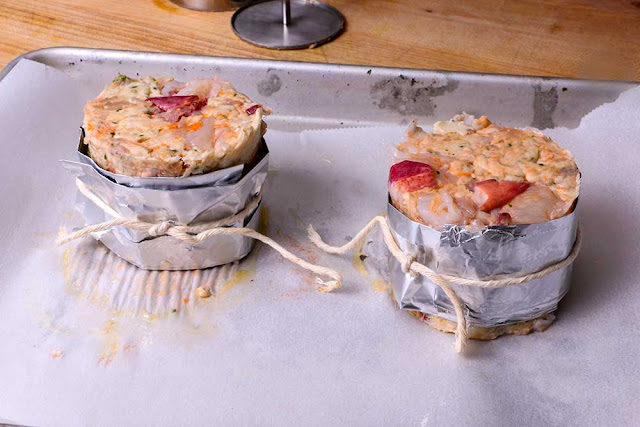 Heat a couple pats of butter and the olive oil in a large skillet until just starting to smoke.  The original recipe called for just butter, but I found it burnt too quickly, so I added the olive oil to increase the smoke point of the mix and get a better sear.

Carefully transfer the steaks to the hot skillet 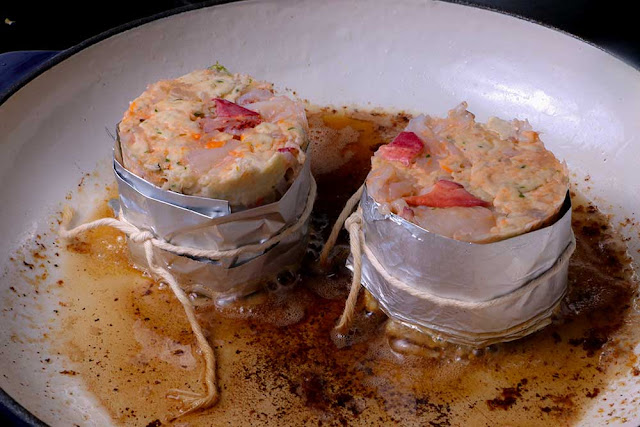 and sear for 2-3 minutes.  When you flip them they should look like this: 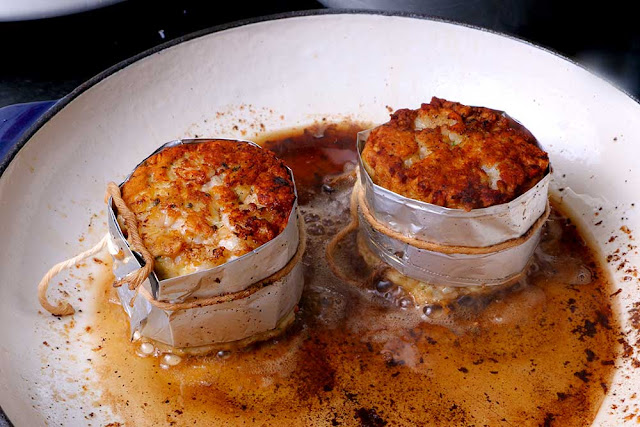 Sear the second side for two minutes as well.  Transfer the steaks back to the tray with a fresh sheet of parchment paper. 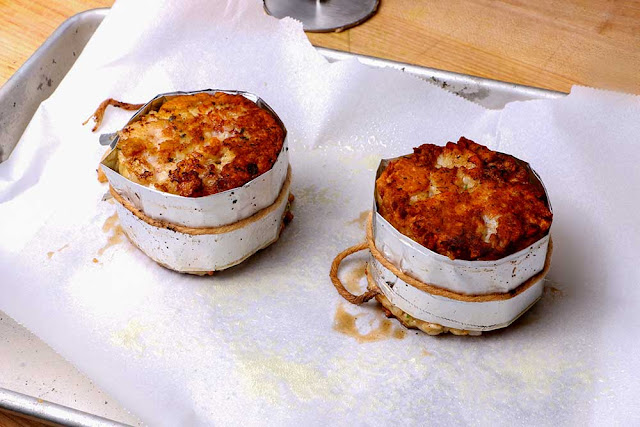 Place in your oven and cook until steaks reach 140F internal temperature.  Should take about 8-10 minutes, but use a thermometer if at all possible.  You don't want to undercook these as a center of raw shrimp is not good, but also don't overcook as these get a little chewy and lose some flavor if you take them to the well-done range.

Nope, 140F is perfect.  You can even take them out at 135F and let them sit a few minutes and they will come up in temp a few degrees.

Serve them with some fabulous sides and maybe a wedge of lemon, but they don't need much to dress them up--they are already quite decadent.  (remember all that butter--it's mostly still there)

Here's a few pics of the finished product: 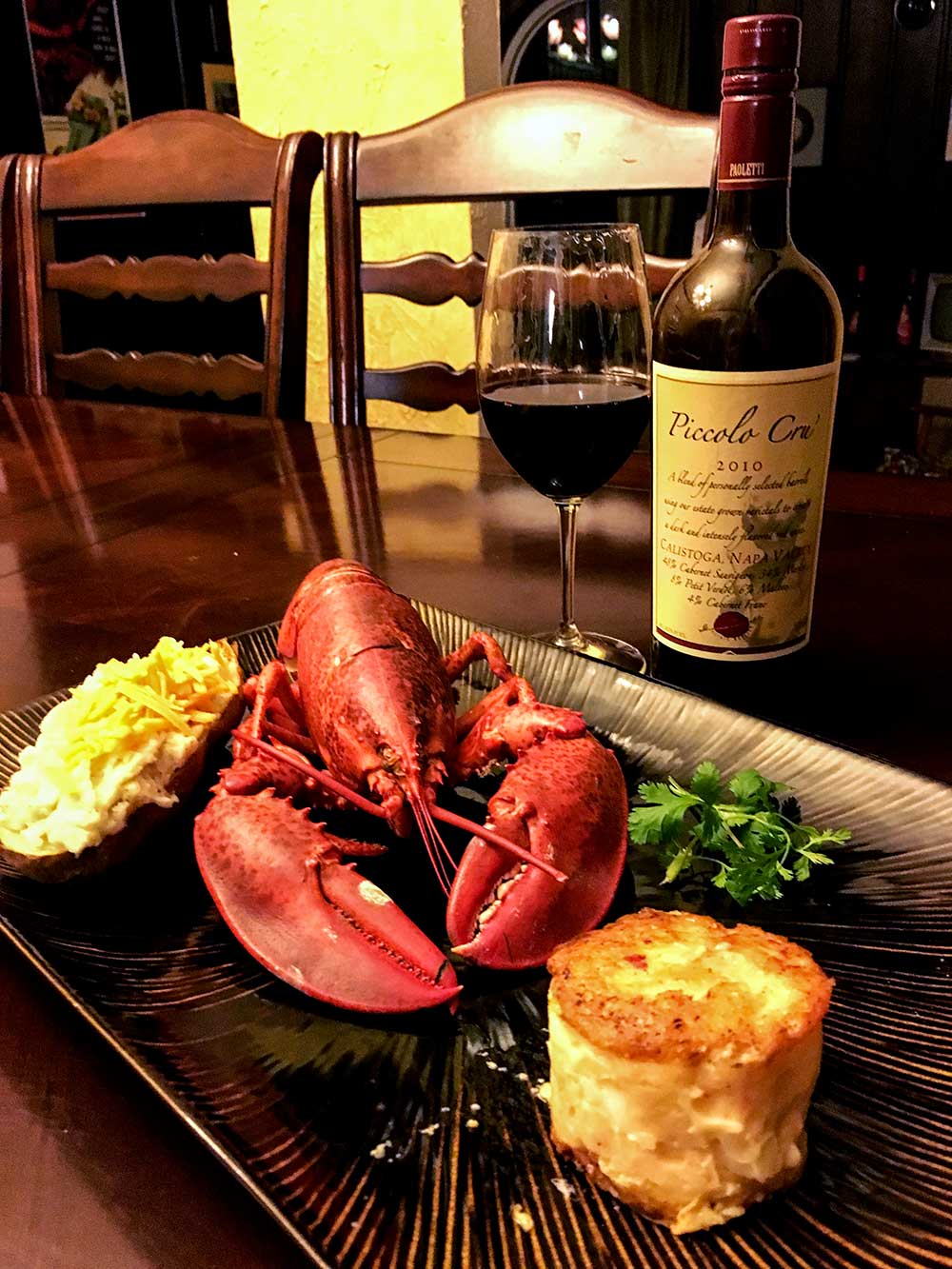 Here we served the steak with a whole lobster as well.  Who needs surf and turf--we'll have surf and surf! 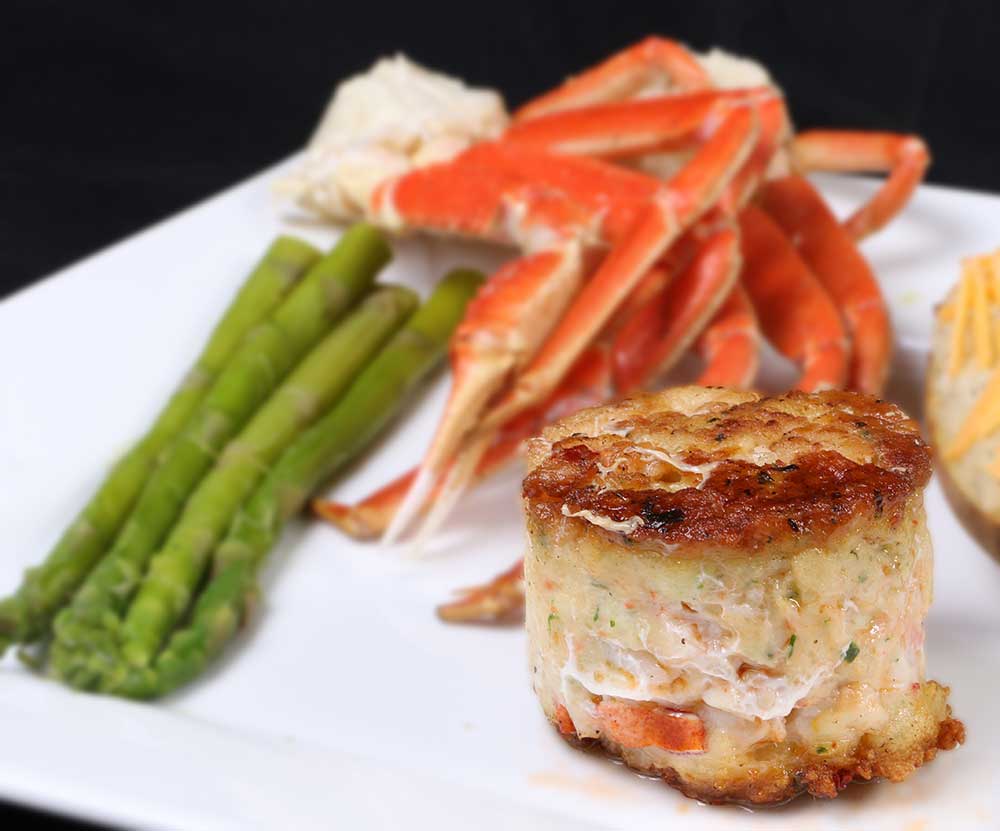 Another surf and surf night--this time with some snow crab legs.