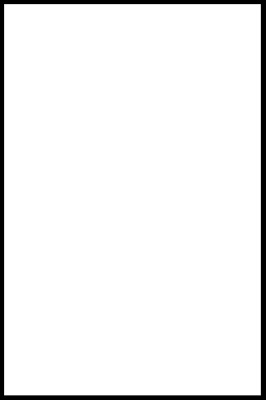 Kalua Pork is the dish de rigueur at a Hawaiian Luau.  Here, the porcine guest of honor is wrapped in Ti or banana leaves and roasted all day long in an Emu, which is basically a hole in the ground lined with hot lava rocks.  In this primitive oven, the entire pig, usually seasoned only with salt, slow roasts to perfection.

Since you probably don’t have a whole pig, lava rocks, or even a hole in the ground, I offer you this much simpler version that will achieve some delicious results. 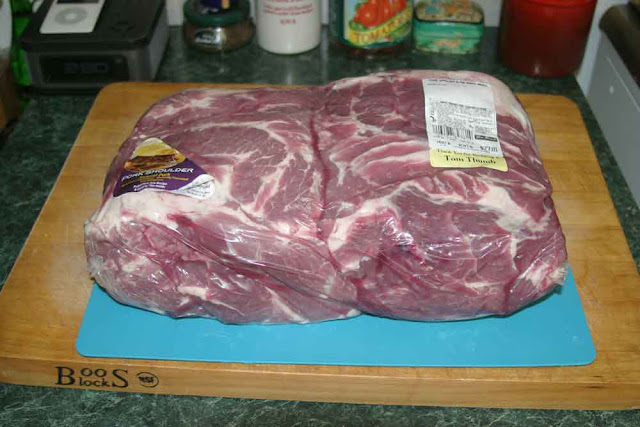 First, you’re gonna start with a couple pork butts, also known as pork shoulder, since it comes from the shoulder of the front leg of the pig, and not the rear.  Make sure you get good pork from a quality butcher, and don’t go for the discounted stuff that is nearing or past its sell-by date.  Kalua pork is hardly seasoned at all, so if the pork has started to turn, there won’t be anything to cover up the off flavors.

Now, If you want to be uber traditional, do nothing more to them than season the pork butts with some coarse sea salt and let sit for a couple hours.  I go a step further, however, and also rub the butts with some paprika and granulated garlic, then I add the salt. 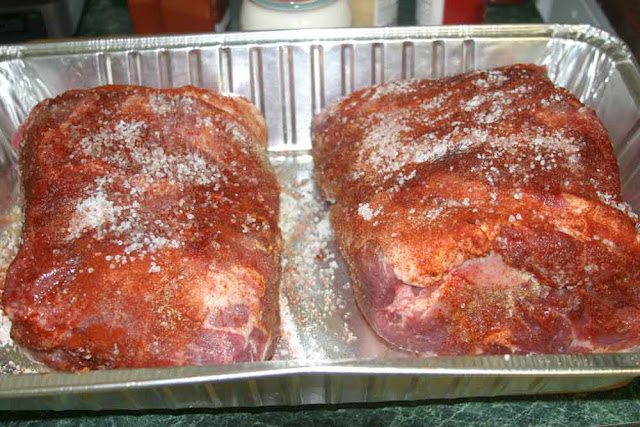 Now, spiced rubs are getting into the area of Carolina-style pulled pork, which is the other great use for a whole pig. (East Carolina, anyway)  But I couldn’t resist adding a basic rub to my version, because it forms such a wonderful bark that will add lots of flavor to the finished product.  Don’t worry, this version is still ‘Kalua’ in temperament, and the flavors from the rub are subtle, allowing the traditional salt flavor and the flavor from the pork itself to shine though. 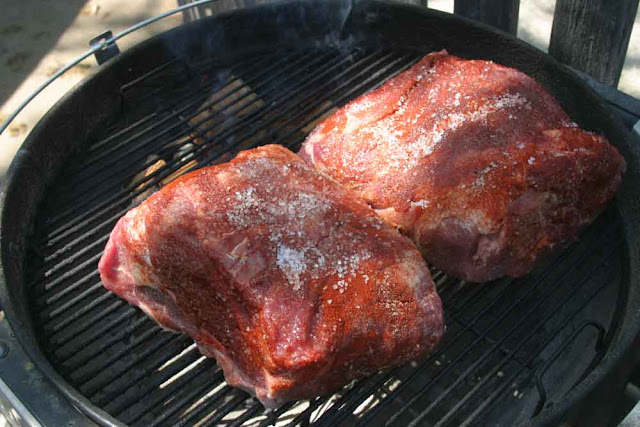 After the butts have sat with the rub a couple hours, fire up your smoker with the wood of your choice and let it settle in at around 225 degrees Fahrenheit.  Now, as to what wood to use?  Personally, I use a fruit wood like apple, which I think goes wonderfully with pork.  There are a couple other options, however.  Remember, in the traditional Kalua Pork, the only smoking that occurs is from the slow burning of the Ti leaves, and this is at best a very subtle flavor, so using a smoking wood like apple is a good choice.  Hawaii does have a native smoking wood that is used quite a lot over there.  It’s called Kaiwe, and it is related to Mesquite.  (The wood that is ubiquitous with many areas here in Texas)

Now, you can order Kaiwe from Hawaii, (or just use Mesquite), and that might make you feel like you’re being authentic, but keep in mind that both of these woods are quite pungent and strong.  Despite being a native Texan, I rarely if ever use Mesquite for anything.  It’s just too harsh and gives things an oversmoked flavor.  So, for this subtle Kalua pork dish, just go with a fruit wood and you can’t go wrong.

Smoke the butts at 225F for about 4-5 hours, until a good bark starts to develop.  At this point, you’ve got about as much smoke flavor as you’re going to get, but, the pork is nowhere near done. 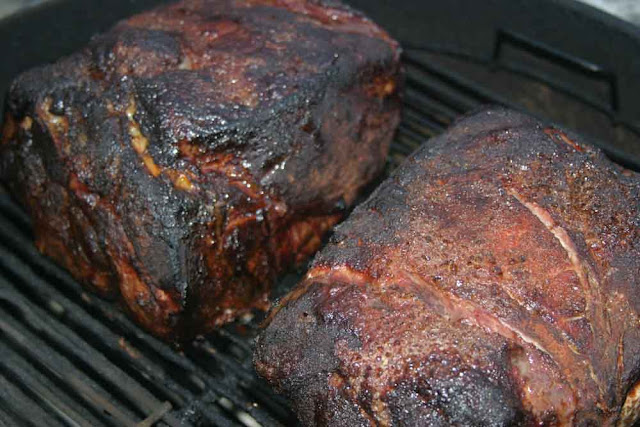 At this point, I transfer the butts into a foil pan, 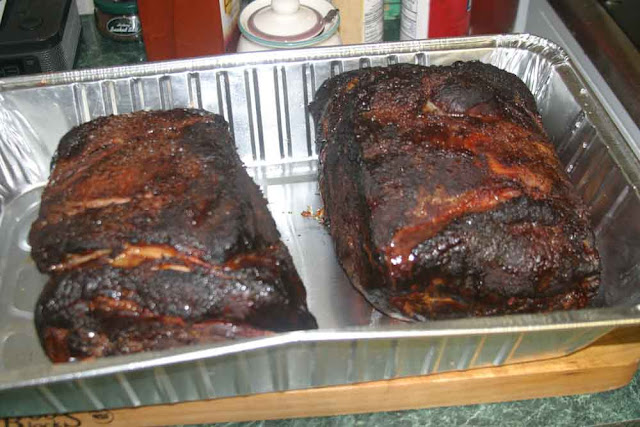 cover with foil, and slow roast them in my oven at 180F for an additional 12 hours or more.  This will break down all that tough collagen in the muscle, which will turn into a nice juice that the butts will sit in and remain moist. 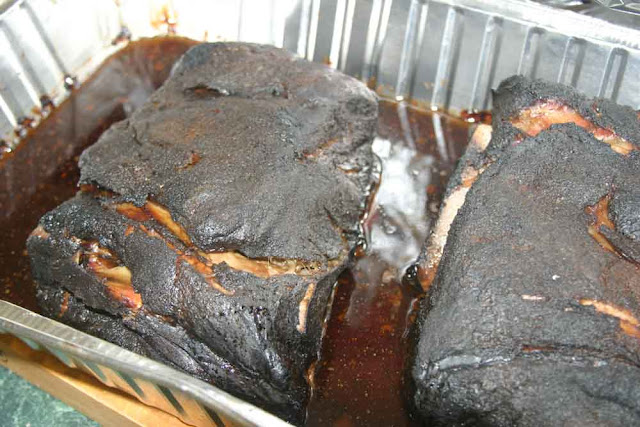 The pork, after twelve hours in the oven.

You could continue to cook the butts in your smoker for the additional time, but if you do, I’d wrap them tight in foil.  This helps prevent the juice from releasing and dripping away, which will dry out the pork, and it also keeps them from getting oversmoked, which can happen with such a long cooking time in the smoker.

Once the pork is done, I usually cool the butts in the fridge for a few hours before I pull it into shreds.  It’s just too hot right out of the oven.  My cooking schedule usually goes like this.  I smoke the butts the day before I ‘m going to serve them, roast them in the oven over night, then put in the fridge until dinner time.  I then pull them apart (making sure to mix in chopped pieces of the bark) 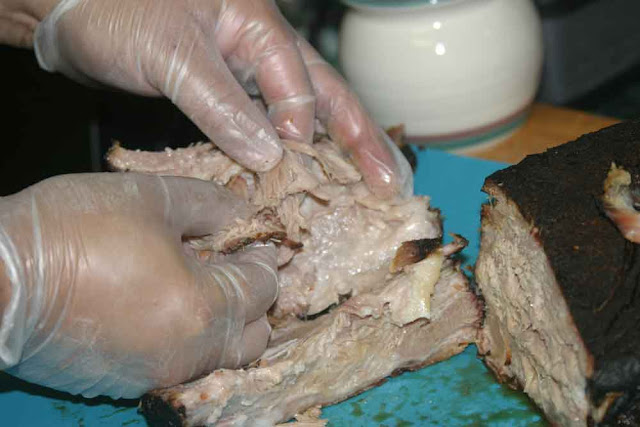 and reheat and serve.

Here we’ve served some with traditional Hawaiian Macaroni Salad and some of my wife’s coleslaw. 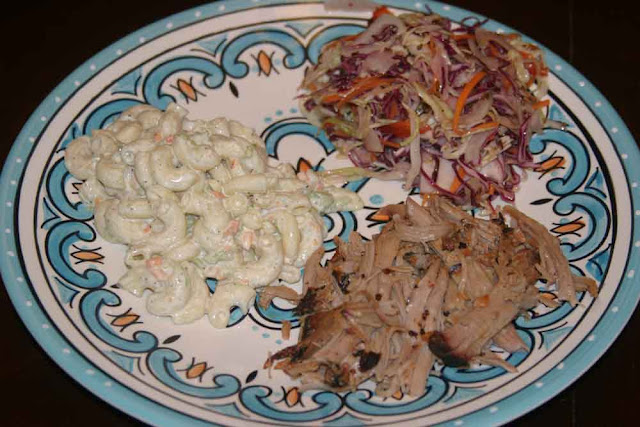 Replace the slaw with steamed rice, and you’ve got a traditional Hawaiian plate lunch, served throughout the islands.

When one thinks of the tropics, many things come to mind, not the least of which is the delicious food to be found there.  Fresh fruits, fish, roast Kahlua Pork, macadamia nuts, the list goes on and on.  One thing that you wouldn’t expect is macaroni salad.  This dish seems more at home at a church picnic or box social, but when you visit Hawaii, you will find the Hawaiian version of mac salad all over, from the fanciest luau to a plate lunch at the most decrepit of local beach shacks, it is ubiquitous.

It’s also really good, better than its mainland cousin, methinks, and it is strangely addictive.

In celebrating our recent excursion to Hawaii, I thought I’d investigate this dish and bring my own version to you here on the Eat’n Man Blog. 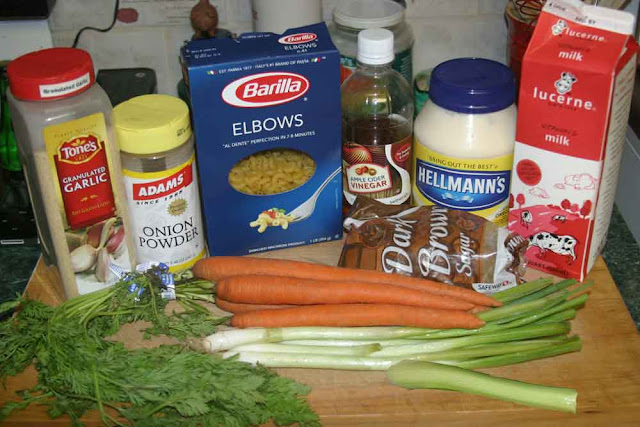 Boil the elbow macaroni for a good 12-15 minutes and then drain. 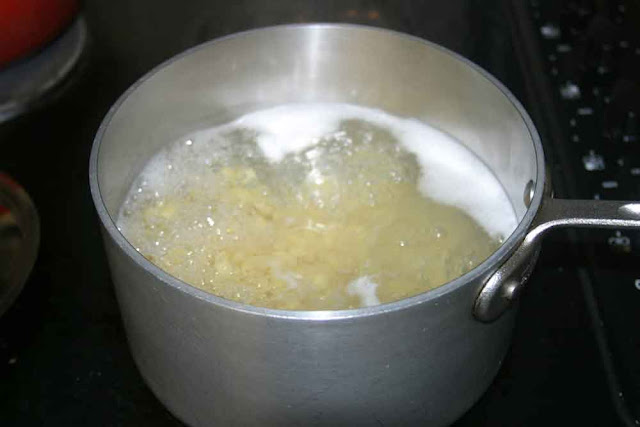 Yes, I know this sounds like a long time, but Hawaiians boil their macaroni to a pretty soft consistency, and you want to be authentic, don’t you?

While your pasta is boiling, make the sauce. 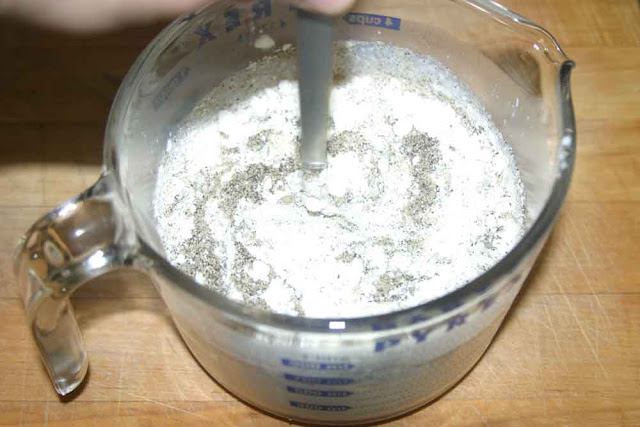 Once your pasta is drained, mix it with the apple cider vinegar 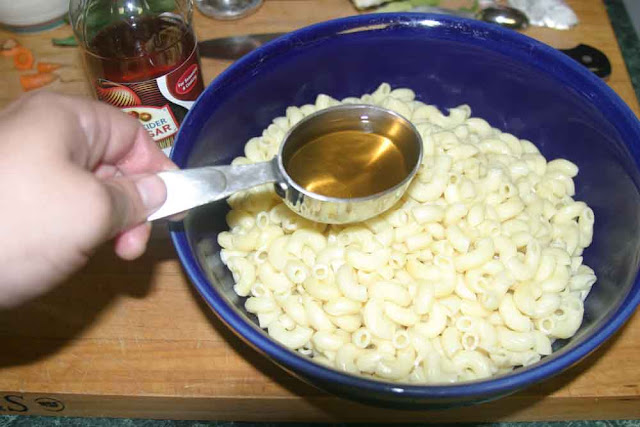 and then place it in the fridge for about ten minutes to cool.  Then add about half of the milk/mayo mixture to it and allow it to cool for another ten minutes.

While the pasta is cooling, chop your celery rib, carrot and green onions, 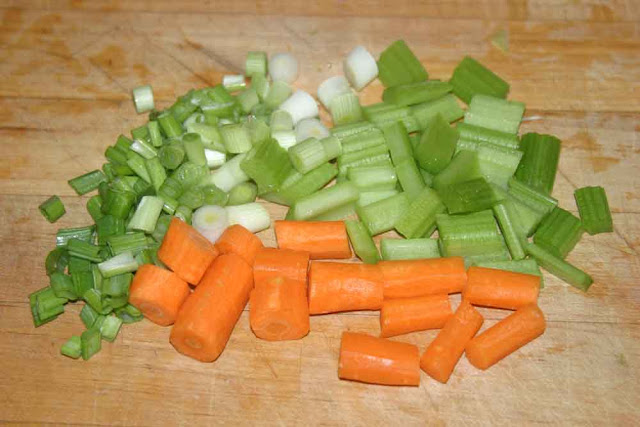 then place them in a food processor and pulse into they are nicely minced. 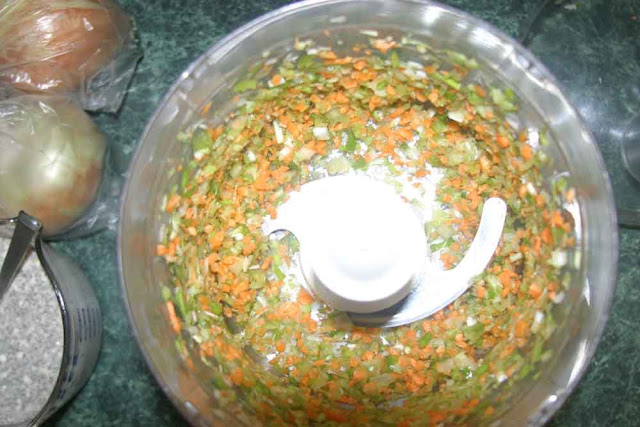 After the pasta has cooled a total of twenty minutes, add the rest of the milk/mayo mixture, then the minced veggies, and stir to combine. 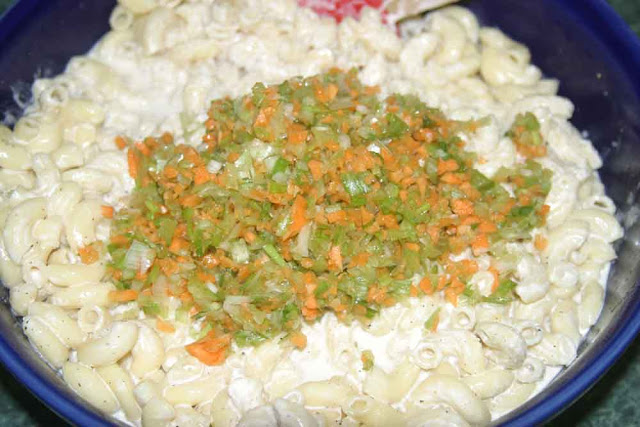 Taste and adjust with additional salt and/or pepper to taste.  Refrigerate for an hour or so to allow the flavors to meld.  Serve cold. 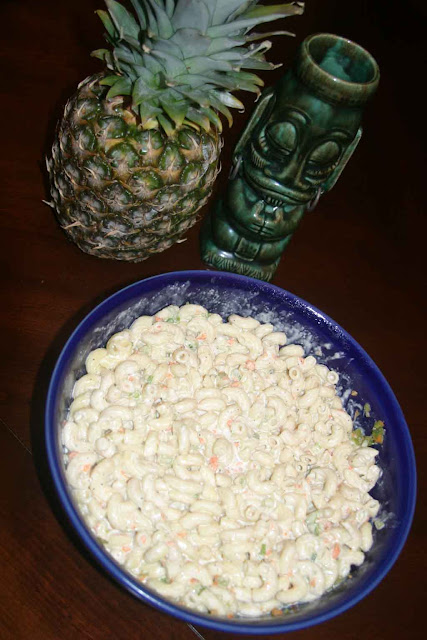